In Volume 1 of The Confidential Guide to Golf Courses, Tom Doak writes that.

“Most overseas visitors are unprepared to see a course like Westward Ho! [You must never omit the exclamation point, which is part of the town’s name.] This is the oldest golf club in England, but more importantly, it is a course that retains the rough and rugged spirit of the game as it was played a century ago, when Horace Hutchinson and his compatriots cut the holes for the day with a pocketknife on their way out, and marked them with feathers.

The clubhouse lies on the edge of town, and since there is a stretch of flat, almost swampy ground between there and the dunes, the first two and last two holes are burdened with problems more common to farming than golf – poor drainage combined with all sorts of live obstacles. Indeed, the first impression of the opening drive is that it may be impossible NOT to hit one of the sheep or horses or cows who are allowed to graze on the common land that serves for fairways here. But after a couple of holes one gets used to the gallery and there is rarely much incident, unless one of the sheep ignores the orange ribbons surrounding the greens and decides to help you line up a putt.

After the second hole, the golf course also picks up in interest. At the 4th, one drives over the famous “Cape” bunker, and the 5th and 6th add to the excitement, as the frequency of the undulations in the fairways reaches a fever pitch. The par-5 9th is a beauty, with only a small bunker at the front left of its shallow plateau green dictating how the approach and tee shot are best played. Then we enter the domain of the Great Sea Rushes, a unique spiky hazard that threatens the golfer with losing his ball for three holes of white-knuckle excitement. The finish is not as inspiring as the holes on the way out, and there are enough plain holes that it’s hard to call this one of the best courses in the world by any modern standard … but like Prestwick or Askernish it is a must-see for anyone who wants to understand what the game is really about.” 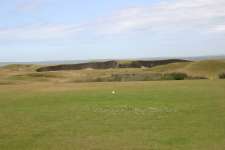 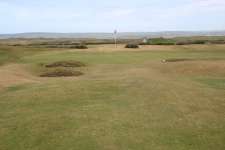 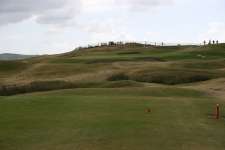