Located on a narrow spit of endangered linksland, the Royal West Norfolk Golf Club was founded in 1892 in the quiet town of Brancaster on the north-west tip of Norfolk. Discovered and designed by Holcombe Ingleby, with assistance from golf writer Horace Hutchinson, the course is squeezed between a large coastal sand ridge and a protected tidal saltmarsh. It only takes one look at the links to understand the precarious nature of its existence, as one side is constantly battered by fierce winds and huge seas while its other side floods during high tide, making the course inaccessible for hours and cutting off those caught playing without checking their tidal charts.

Arranged in a single out and back loop along the sea dunes, with the inward nine playing into some of the stiffest prevailing winds in Britain, the layout has never been re-designed but has changed considerably over time, mostly because of the loss of duneland and the narrowing of its playing areas. Several tees along the dunes have been lost through the years, while the 11th hole was completely destroyed during severe storms in 1942. What remains is a quirky kaleidoscope of eccentric golf holes full of deep sleeper-faced bunkers, tiny pots, quick and heavily fortified greens and partially flooded marshlands. These marsh areas actually create some very fine fairway corridors and are used strategically within the design, especially on the heroic par five 8th played twice diagonally across the floodplains and demanding those wanting to get home in two take the aggressive and longer carry on both shots.

The full Brancaster experience begins at the wood paneled Victorian clubhouse, which enjoys splendid views over the North Sea and a cracking opening hole played along the dunes to a terrific little green tucked into the sand. The next all-star hole is the 3rd, its approach blind over a huge sleepered embankment and into a slim green. Turning straight toward the sea, the 4th is then a cross wind par three of considerable challenge, its built up target set beyond a bank fortified with daunting sleepers. The 5th features a bizarre blind drive through two posts on the top of a ridge while on the back nine the one-shot 10th is a fine hole that can be brutal as you turn to experience the headwinds for the first time, and both the strong par four 14th and the short 15th have cool sunken and obscured green sites.

Despite its idiosyncrasies, Brancaster is a more substantial test than first appears with some excellent design elements, well built and well positioned hazards and an interesting variety of green sites. It is not really recommended for general consumption, though, as many will be unimpressed by the fact that the course floods and that there are poor holes, blind greens, unfair bounces and average conditioning. For those who enjoy their golf adventurous and a little unconventional, however, Royal West Norfolk is like stepping back in time and is a real treasure that should be savored before too much more of it is lost. 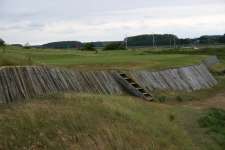 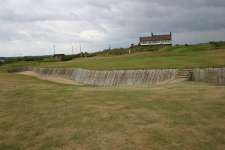 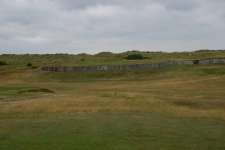