'I will not say there are not greater links than Rye, but I will say that there are few which combine and gather into one place so many of those qualities which make the game of golf unique.' Patric Dickinson

Prestigious and extremely private, the Rye Golf Club in the south of England is significant not just for its cherished links but also as the birthplace of one of golf’s great architectural careers. A qualified lawyer, Harry Shapland Colt was appointed a partner in a law firm in nearby Hastings in 1894 but almost immediately turned his back on that profession to help establish the club at Rye and then design its course. He later became the club’s Secretary before moving to the newly formed Sunningdale Golf Club and then onto fifty years of further design endeavors. Though his work at Rye has been significantly altered over the years, the links remains very true to his design ideals.

Colt’s course was built partly on the inland side of a road running through coastal linksland between Rye and Camber, but as the road grew more popular the club moved closer to the beach and into the area’s heavier central dunes. The layout was first modified by Tom Simpson in 1932 and then by Sir Guy Campbell in 1938 before final alterations were made during an in-house restoration program undertaken to repair damage caused during the Second World War. Like Colt’s original plan, the current links play mostly back and forth along a series of ridges and across the sort of rippling, heaving ground and resultant humps and bumps that would not look out of place on a course like Sandwich. The variety of its daunting green sites, which seem simple but are severe, is matched only by the strength and diversity of its extreme driving challenges, the tight fairways routed through shallow valleys, along sandy crests or angled across the steep hills.

Rye opens with its only par five, the hole almost tormenting those unable to get off to a flying start with the knowledge that there are few more birdie opportunities to follow. The first real standout hole is the 4th, which features one of the toughest tee shots in the world. Following a crested ridge, the fairway falls on both sides to punish those unable to drive dead along its narrow axis. The 6th is another superb driving hole, this time blind and diagonally over a large dune. Next up is the best of Rye’s infamous par three’s, the 7th, which like the 14th has an elusive elevated target and wicked surrounds including deep bunkers and timber slats cut into its bank to cruelly prevent stray golfers from putting back onto the tiny peak. Elsewhere Simpson’s 9th is a fun short four while the long and bunkerless 13th is a remarkable hole with the approach crossing a tall dune ridge into a hidden green, a little like the Klondyke at Lahinch except that here you have to use trigonometry and align two posts on top of the dune to work out your angle into the flag. The closing run is particularly strong and includes the wonderfully crumpled ground of the 15th, 16th and 18th which form a fittingly unconventional end to a unique experience.

As its main sand structures run parallel to the coastline, the golf here is almost always played with the winds whipping across you making the slender fairways and small greens even more difficult to hit. The lies are also a key feature of the course, varying from uneven to extremely uneven most shots are played with an irregular stance, to the point where should you fluke a level lie you almost have to check that you remember how to play such a shot.

While the links has benefited from its move into the hills, changes made on the flatter section of the site have been less successful. Most notably, the pushing of the 10th green away from the road which subsequently caused adverse alteration to the 11th and the loss of exciting driving lines on the 16th and 18th. More recently an area right of the 11th fairway was mined for gravel, the resultant lake sadly out of place on a links of such class. These points should not dissuade one from attempting to play here, however, as the short holes are very special and moments like the drive on 4 and 6, approach into 13 and fairways at 9, 15, 16 and 18 are truly unforgettable. 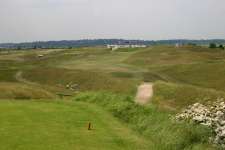 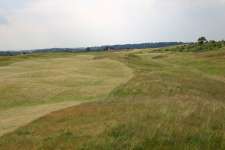 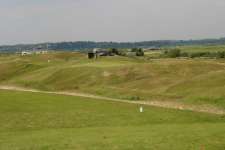