In Volume 1 of The Confidential Guide to Golf Courses, Tom Doak published that.

“One of the ironies of golf among the biggest dunes [Birkdale, Cruden Bay, Ballybunion] is that sometimes the courses lack small-scale undulation and feel manufactured. Indeed, the huge dunes of Saunton were impenetrable in the early days of the game and the courses only came to being when modern equipment was available to tame them, and it’s likely that some dune slacks were filled in to make fairway grasses thrive instead of staying wet. This explains the inferiority of the later West course, which in fact ventures into the biggest dunes.

East course is noteworthy for having one of the most unusual mixes of holes I have ever seen – there are eleven par-4 holes in the first twelve, and the first two short holes, the 5th and 13th, are two of the toughest threes I have ever played. I actually enjoyed the unusual set-up, as one can get into a good rhythm of hitting the driver, which is essential on such a demanding course. A few of these early two-shotters are hard to remember afterwards, but there is nothing easy about them, and the sudden rush of 5’s and 3’s at the finish makes for a wild scramble in a good match.”

The East Course at Saunton received a score of 7 out of 10 from Tom Doak and two of his co-authors. The West Course received two 5s and one score of 6. 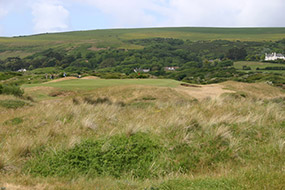 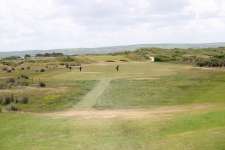 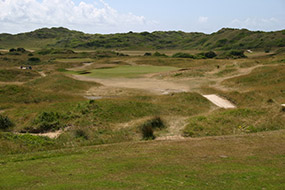 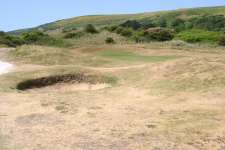