Seacroft is known as a hidden gem among the top courses of Great Britain and Ireland.  It is a traditional links course tucked away on the Lincolnshire coast at the south end of Skegness.  Because of its situation on the coast and its fast draining soil the full course with normal tees and greens is virtually certain to be open.

It is adjacent to the Gibraltar Point Nature Reserve with glorious views over the Wash to the Norfolk Coast.  A great deal of the course is also a Natural England Site of Special Scientific Interest (SSSI) where golf and the environment join together in harmony.

The championship course plays host to several amateur championships but as a member’s owned club it also prides itself on being suitable for golfers of all abilities.

Seacroft Golf Club opened on 24 April 1895 when the original first tee was outside The Vine Hotel and the course had only nine holes. In 1900 it was decided to build a new 18 hole course designed by Willie Fernie of Troon and much of the present course is little changed from that design. In 1923 further land was purchased and the 12th, 13th, 14th, 15th and 16th holes were improved.

Many of the founding members of the club were from Nottingham, in those days Skegness was commonly known as Nottingham by the sea. The houses near the course were built after its conception by many of these industrialists and professional people who spent much of their leisure time at Skegness.

The original clubhouse was built in 1904 and the present clubhouse which was opened in 2005 is built on that same site.

Seacroft has hosted many matches and tournaments of distinction throughout its history and has produced its own champions, the most notable being Helen Hewlett (nee Dobson) whose magnificent amateur career may arguably never be surpassed. After turning professional in 1991 Helen went on to win in Europe and the USA. Now once more an amateur, Helen is often seen playing on the course. 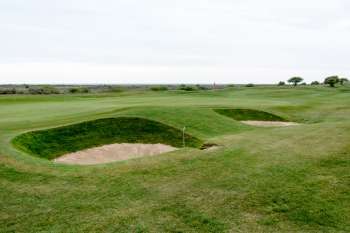