Golf was first introduced to the charming Cornish sailing town of Rock in 1890, when holidaying Londoners formed the St Enodoc Golf Club on its sandy headland. Situated on the North Shore of the Camel Estuary and enjoying superb views across the Cornwall coastline, the St Enodoc linksland is an unusual landform that was shaped when great Atlantic gales blew vast deposits of sand up onto the bluff. These deposits created the large dune ridges and deep sandy swales that James Braid used so expertly within his 1907 design of the club’s Church Course.

Braid incorporated all of the noticeable features of the site into a routing that takes you across bumpy linksland, into heaving dunes and beside some lusher farming pastures. Highpoints are dotted throughout the round but are especially prominent early. The first six holes are exceptional, starting with a stunning opening par five that crashes down toward the magnificent coastline and its distant green. The next heads back up into the hill and is followed by two outstanding par fours, the 3rd, a long hole that plays diagonally across an ancient rock wall and the 4th a world-class driveable four that rises into a small target with an out of bounds fence tight on its right side. Cleverly the green is angled to best accept shots from this side rather than the lower left plateau. The 5th is then a fine par three added years later by Tom Simpson while the 6th is a sensational par four that twists into a slither of fairway and is then semi-blind across the enormous Himalaya bunker. Possibly the biggest sand hazard in golf, Himalaya is cut into the face of an 80-foot dune and is an especially fearsome sight for those with a tendency to catch their irons a little thin.

The rest of the thrills are spread more evenly through the remaining holes, the blind drive on the 7th, the strategic par four 9th and the approach into the perilous ledge green on the 14th the best of a central section linking the awesome start to the strong finish. This area also includes the Church hole, the 10th, which curves through a natural valley beneath a massive dune ridge toward an ancient stone Church. Dating back several hundred years, the building was only restored during the Victorian period after having been remarkably buried for decades beneath the sands. The hole itself is attractive but a little too narrow off the tee, while the subsequent loop around the Church is strangely mediocre. The best of the back nine follows the par three 15th, which plummets from the higher pastoral ground back onto a closing coastal stretch that includes a terrific tumbling par five, a long one-shot hole back into the heavy hills and a brutal finisher played from an elevated tee down an undulating valley.

A great mix of scenery and strategy, the 69 par here will offer ample birdie opportunities to those on top of their game but is far from a pushover as trouble lurks constantly and the site is exposed to violent prevailing winds off the Atlantic. With a number of great holes and some of the finest sea views in Britain, St Enodoc is a tremendous days golf and one of the games genuine hidden delights. 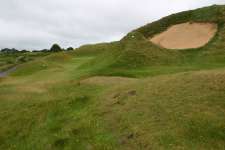 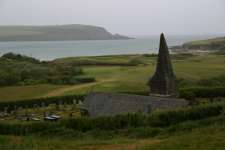 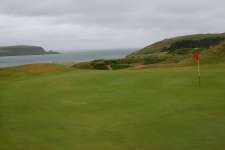 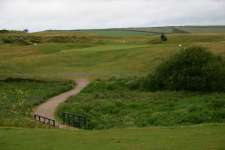