The Berkshire Golf Club was born on a beautiful stretch of heathland close to Windsor Castle, its home an ancient forest leased from the British Royal family, who for centuries had used it as hunting ground. During the First World War the land was cleared by the British Defence Force, who performed Military maneuvers on the site between a Red and Blue army. The club’s two courses were later named after these brigades with the Red Course occupying the more undulating higher ground.

Both courses were designed by Herbert Fowler, a Golden-Ager with a talent for building natural courses who believed that god created golf land and that ‘the less man meddled, the better for all concerned’. At The Berkshire his terrain was ideal for exciting golf, the undulating forest covered in majestic chestnut, birch and pine and full of interesting ground movement. Fowler’s routing and the flow of his holes, particularly on the Red Course, is outstanding with the unusual mix of six par threes, fours and fives making up the layout. A remarkably cohesive journey, each hole falls perfectly across the site and so good was his routing and subsequent design that little revision has been made since its 1928 opening.

The Red’s opening holes skirt the perimeter of the property and form a solid introduction to a course which really kicks up a gear from the gorgeous 5th through to back-to-back short par fours at the 11th and 12th. The 7th, 10th and 16th are all great long par threes while the best of the two-shot holes is the beautiful 8th, played through the pines and turning slightly as it first crosses a ridge and then rises into a narrow green. Though some criticize the three-shot holes for being a little short, the rolling 17th is a very fine challenge and most of the others are right on the balance of par and offer real eagle to bogey possibilities.

The variety of the Red Course is not just in its unique mix of par holes but also the use of its physical features, with strategic holes laid naturally across an attractive and diverse landscape. The Blue Course is similarly striking and has some wonderful short holes such as the 4th, 13th and its classic opener, though the longer holes through the flatter portion of the property tend to lack the interest of the Red Course, and the heather is slightly less prominent. The bunkering and greens, however, are equally impressive throughout both layouts. The greens are quite subtle but feature clear and clever slopes while the rugged bunkers are fringed with heather and typically deep enough to extract a genuine penalty when found.

Herbert Fowler was clearly a talented designer and at The Berkshire his use of all the available contour and slope within the design, as much as the wrinkled and links-like fairways, continue to give his course’s their timeless feel. The pick of the golf, the Red Course may be less demanding than some of Fowler’s other designs, but is as enjoyable as any he created and the equal of most in this fantastic region. 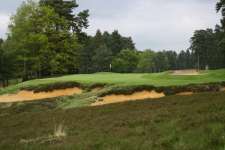 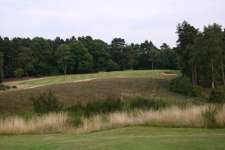