Scotsman James Braid was one of the greatest golf course designers in history.

He respected nature and let the lie of land dictate the path for his fairways, tees and greens.

In 1922 Braid laid out a golf course on low lying heathland, just a stones throw from the Suffolk coast in an area of outstanding natural beauty.

His creation was Thorpeness Golf Club.

Golfers play a course winding through heather, gorse, pine and silver birch trees, hit from firm quick drying soil with rare birdsong in their ears and the tang of sea salt in the air.

Thorpeness has been described by the Sunday Telegraph Golfing Guide as “Reminiscent of the inland glories of Sunningdale and Woodhall Spa”.

Regarded as one of the best golf courses in Suffolk, Thorpeness belongs to a unique group of worldwide golf courses identified by a single special landmark. Turnberry and Harbour Town Links have their lighthouses and St Andrews has its Swilken Bridge – Thorpeness has the ‘House in the Clouds,’ a curious and dramatic spectator which watches over our fairways. 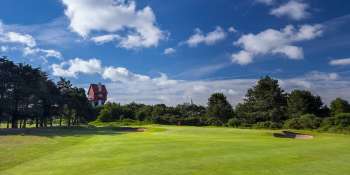