The charming resort village of Woodhall Spa in the Lincolnshire countryside owes its existence to the discovery of mineral water in the 19th century, a discovery that almost destroyed a golf club which would later put the village on the international golfing map. Though the Woodhall Spa Golf Club was created in 1890, the increasing popularity of the town saw its first two courses swallowed up by urban expansion. Local landowner and prominent member, Stafford Vere Hotchkin was the man who saved the club by first leasing it a narrow tract of heathland for a new course and later becoming the driving force behind its success.

Harry Vardon designed the original layout on the Hotchkin property but his 1905 course was lengthened and altered substantially by Harry Colt between 1911 and 1914. During this period Hotchkin was actively involved in all aspects of club operations and following the First World War he took back control of the property and became responsible for the maintenance and upkeep of the course. This was a significant period in the development of Woodhall Spa as Hotchkin, an Honorary Colonel, then spent the best part of two decades indulging his interest in design by continually tinkering with the layout, leaving Colt’s routing but repeatedly changing the tees, greens and, most noticeably, the hazards.

Built primarily on sandy soil, the Hotchkin Course is set amongst banks of fescue and heather with its flowing fairways generally lined by mature canopies of pine and birch. Its primary feature is undoubtedly the bunkers, which are huge, and mostly the work of the Colonel who personally dug them deeper each year to create canyon-like traps capable of dealing severe punishments to even the best players. Believing vehemently that bunkers should be hazards, his fairway traps all typically extract a full stroke penalty while finding greenside bunkers will often cost you more, those on the 4th, 5th and 12th among the deepest on earth. Though penal when found, the placement of hazards is quite strategic with many protruding into the line of play to catch those being overly aggressive or too eager to avoid trouble on the opposing side.

What sets Woodhall Spa apart from the other heathland layouts of England is the relentless and sometimes overwhelming nature of its challenge. Aside from the opening hole you never really get comfortable as disaster lurks constantly throughout the round. The course is dotted with really strong par fours like 2, 3, 4, 7 and 13 and an attractive group of strategic three-shot holes but its best moments are slightly more subtle, and include the short par three 5th with its narrow green ringed by a seemingly bottomless pit of sand. The par four 11th is also a brilliant hole across heather and through gorse from the tee and then into a terrific green placed beyond a messy hollow set deceptively back from the putting surface. Best of all, though, is the short 12th, which requires little more than a mid-iron but is played to a slim plateau green flanked by horrendously deep traps.

Woodhall Spa has a fearsome reputation and is one of the toughest inland courses in Britain. Though Hotchkin later became a course designer of note, this was his passion, his property and ultimately his obsession and he was adamant that the challenge of Woodhall Spa should stand the test of time, something few who play here would dare deny that he achieved. 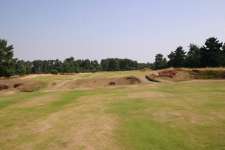 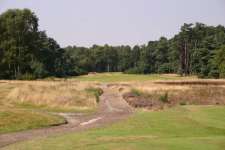 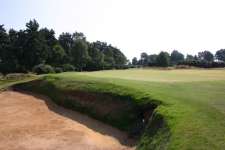 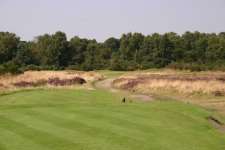