‘The Prince is one of the premier golf course designs of my life’ Robert Trent Jones.

Possibly the world’s most exclusive golf club, Le Prince de Provence was actually conceived as part of multi-course residential development by Robert Trent Jones during the 1970’s. Scouring the Mediterranean coastline for an ideal site to build the ‘Pinehurst of Europe’, Trent Jones found and acquired a 2,500-acre property in the hills high above the French Riviera. He then obtained the largest planning consent ever granted by the French Ministry, which included three championship golf courses, hotels, houses and apartments to be included on his vast estate. Sadly for Trent Jones this preliminary approval was later overturned during the detailed planning process when conservationists pressured authorities to reject his plans despite the first course having been completed and the developments proposed density being reduced to a third of the original concept.

For six years an impeccably maintained golf course sat dormant without a single round being played, a court decree that, due to a permit technicality, golf on the site was illegal proved the final straw for Trent Jones and his partners who lost their substantial investment in the property when it reverted to a lending bank. The white elephant was eventually sold to a syndicate of Norwegian businessmen who scrapped any housing or expansion plans and instead decided to create a private single course golf club for a fortunate few friends. With significant financial might, the new owners challenged court orders preventing play on the course and in 1999 were able to get an injunction on the ruling and begin golfing.

Occupying one of the region’s largest private property’s, the course itself is totally secluded and surrounded by the untouched Provence hills. The holes weave through red rocky outcroppings replete with distinctive umbrella parasol pines that are native to this small region of Provence and an integral part of the design on many holes. While the rolling valleys and uniquely shaped pines dominate the landscape, the designer was unafraid to add to what nature had left and was able to build believable undulation into holes such as the 2nd, 7th, 10th, 15th and 17th with great effect. The green contouring is also outstanding, most of the clever slopes presenting a range of short game options, which is not always the case on other Trent Jones courses.

Consistent throughout with the designers mantra of easy bogey, hard par golf, Le Prince opens with a series of well-bunkered holes, the most notable early moment being the superb right-bending 2nd which is played through sand and red rock and into a delicious green site. Shaped and bunkered to resemble Trent Jones’ famous 16th at Augusta National, the 4th is the first of a fine group of one-shotters and although the par fives are slightly less impressive, the reachable 8th is a nice hole and both the 3rd and 12th feature interesting pitch shots. Further highlights include the attractive away angled green on the downhill 10th and the bunkers and slopes that artistically frame the 15th and 17th holes. The crested drive and cross-pond approach into the dramatic 7th hole are also terrific while the 18th is a wonderful closing hole that turns into a small rise with turn point bunkers and a lone pine guarding the corner. This tree was actually retained by Robert Trent Jones Jr against his father’s wishes and although a tree blocking a bunker is never ideal, this one does work because the temptation to flirt with the right side, despite its dangers, is still quite strong.

Although Le Prince was the brainchild of Trent Jones senior, his son was heavily involved closer to completion due to his father’s poor health. It was one of the few joint ventures they worked on and clearly impressed Robert Jr who was delighted that his father found the property and describes his design as ‘a true masterpiece.’ Indeed Le Prince de Provence is the embodiment of a life’s work from a designer who poured his heart and soul into the property for more than twenty years. It was one of the rare golf course projects that Trent Jones personally invested in and with a conglomerate of his finest holes, plus first-class shaping and construction, is an appropriate tribute to his famous design style. 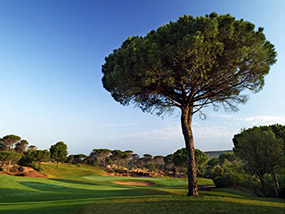 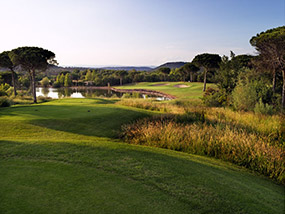