‘At Nirwana we were lucky to get the spectacular cliff-top holes but we are most proud of our work in the open inland landscape, particularly the extensive rice fields we built to create the impression that the golf course had been laid out through them.’ Bob Harrison

Part of a large resort on the southwestern coast of the popular Indonesian island of Bali, the Nirwana Bali golf course lies on a spectacular oceanside property the boasts an intriguing mix of landscapes, ground contours and tropical vegetation. Designed by Greg Norman and Bob Harrison, the course is famous for an ocean-carry par three but recommended as much for an excellent series of undulating inland holes as those along the coast.

From the opening hole, Nirwana weaves through deep valleys and thick jungle, across creeks and gullies, over beaches and onto seaside cliffs. There are even rows of terraced rice paddies, which look natural but were actually crafted by the design team and its shapers. Exposed to variable winds, the routing cleverly changes direction regularly and is highlighted by some fine green shaping and strategic bunkering. Driving is rarely cramped, although you do often feel the need to play down a tighter side in order to get a level stance, a shorter shot or a better angle into the green sites. A number of targets are then pressed hard against wandering creeks and ditches and generally slanted toward danger, forcing those hoping for uphill birdie putts to really flirt with the hazards.

The first four holes loop inland from the clubhouse and are a tremendous introduction to the golf course and to Bali. The opening sidehill drive, for example, is played across the rice fields and needs to avoid deep bunkers to set up a clear shot toward a green nestled against a jungle backdrop. The 2nd is then a lengthy par three alongside a thick forest to a smallish green sloping sharply toward the trouble. Following excellent approach shots into the 3rd, 4th and 5th, the long, dipping par five 6th is the first to catch a glimpse of the sea as it heads toward an attractive target framed by the waters of the Indian Ocean. It is followed by the breathtaking 7th, a world-class par three played across the ocean’s crashing waves into a wickedly angled green that punishes those cowering away from the water. Farther along the coastline, and fully visible from the tee, is the haunting Hindu sea temple of Tanah Lot, which rests among the surf on its own rocky outcrop.

Of the remaining holes, standouts include the mid-length par four 12th, which points seaward but bends late through a valley toward a steep green beyond an estuary, and the driveable par four 13th, its narrow green set dangerously at the edge of a cliff. The 14th then plays partly over a volcanic sand beach in the opposite direction to the 7th and with a more receptive elevated green site for those bailing away from the water. Despite the setting, in some ways this is the least impressive of Nirwana’s four fine par threes.

While Nirwana Bali is a rare treat in quality-starved Asia, unfortunately the conditioning and maintenance of the course is not always to the highest standards. There are also rumored changes in the offing, which would seem unlikely to elevate holes beyond their original standing. Regardless, Nirwana is a very pleasant resort golf experience and a much better course than some of the one-hole wonder reviews imply. 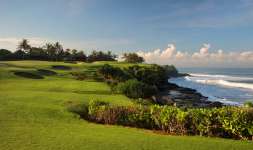 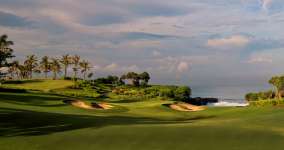 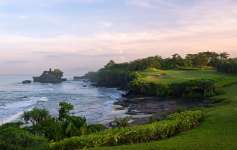 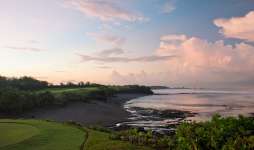