Superbly situated at the tip of the Rosses Point Peninsula and less than five miles from the town of Sligo, the largely unheralded County Sligo Golf Club is one of the strongest and most scenic links in Ireland. Founded in 1894, on land owned by an uncle of Nobel Prize winning poet W.B. Yeats, the club originally golfed on a simple nine-hole layout close to the current clubhouse, which was extended to eighteen holes in 1906 and then given to the great Harry Colt to redesign in 1927.

Clearly impressed with the long stretch of windswept coastal land at his disposal, Colt arranged his holes in a single anti-clockwise loop along the Atlantic shoreline, the routing bearing remarkable similarity to his beloved St Andrews. The bunkering was not added until the holes were in the ground and patterns of play had been established. Somewhat controversially, his associate Charles H. Alison was sent to finish the job, and Alison left the club with deep hungry hazards that were initially unpopular with members but are now a real feature of the layout.

The course itself starts rather inauspiciously by tracking up and then down a steep incline before settling onto low profile links terrain sandwiched between the beaches of the Atlantic Ocean and the surrounding mountainside. At the northern end of the Peninsula the golf briefly turns inland toward the towering Benbulben mountain, the inspiration for much of Yeats literature, before heading back along the Bay of Drumcliffe and making a stunning re-entry onto the main seaside linksland at the beach-carry par three 13th. Built mostly across minor ripples and relatively unexciting undulation, Colt’s talent for using the land’s existing contours is evident throughout a layout that features simple but stern golf holes that are often visually deceptive and complimented by superbly contoured greens.

After a somewhat scratchy start, the middle section of the course is particularly strong and includes gems like the 7th hole, its approach played diagonally across a deep burn that also snakes around the side of the green. The elevated 8th green is equally impressive and followed by a delicious short par three that stares straight at Benbulben and introduces you to a series of fine holes at the far end of Rosses Point. The best golf, however, is saved for the late holes along the shoreline. These include the magnificent par four 14th, which bends twice and is cut by a twisting burn, the seemingly simple one-shot 16th and Sligo’s superstar hole, the 17th, a par four of mighty proportions routed across some of the most dramatic duneland in the country.

Aside from the 14th and 17th, at first glance none of the holes at Rosses Point appear obvious stunners but Colt’s intelligent design and outstanding greens are so effective that you often only realize the genius of a hole after succumbing to, what at first seemed, its innocuous challenge. Indeed County Sligo is a links that works best by providing a constant and consistent test for all golfers, its final six holes as thorough an examination of your ball striking abilities as you will find anywhere in this part of the world. 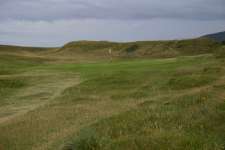 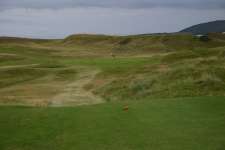 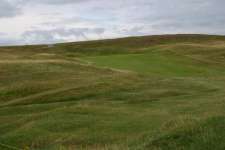 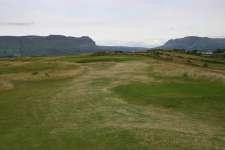