Surrounded by massive cliffs and crashing seas, the extraordinary Old Head Golf Links is built atop an ancient sandstone Promontory, known as the Old Head of Kinsale, which protrudes out from Ireland’s southern coastline. This historic site, whose earliest settlers predate Christ by several centuries, had been used as grazing ground until the late 1980’s, when brothers John and Patrick O’Connor purchased the property with a vision to convert it into a golfing field.

Recognizing the potential of its 200-acre diamond-shaped headland for golf, the O’Connor’s had to endure a protracted battle with local authorities for permission to build a road onto the site before they could proceed with their course. During this period a number of course architects and possible routings were considered and the final Old Head layout turned out to be the work of several key figures, including the owners who insisted upon pushing holes dangerously close to the edge of the cliffs to maximize the golfing drama. Although internal out of bounds areas are a regrettable by-product of the clubhouse location and its busy access road, the design itself is quite good with most of the better holes strategic and the tamer inland holes, that don’t work quite as well, saved by their compelling scenery.

The realization that Old Head is something special hits long before you step onto the first tee, the sense of excitement building from the drive onto the rocky headland which takes you across a narrow isthmus and past ancient stone circles, castle ruins and remnants of a medieval church. Engulfed by incredible 360 degree ocean views, the course begins with a relatively benign opening hole, but soon steps up a gear at the 2nd, which like the 4th, skirts along the edge of the ocean cliffs with anything pulled or hooked plunging 300 feet down into the Atlantic. Sandwiched between these holes is a par three that also dangles perilously on the edge of the abyss. Fortunately from the 5th you can catch your breath as the next seven holes are inland of the perimeter and, although difficult, they are not life threatening.

Next to make the highlights reel is the impossibly dramatic par five 12th, routed back along part of the isthmus its drive is a blind blast from beneath the cliffs to a slither of fairway located well right of where you imagine. Anything short or left from the tee swims with the fishes while anything too far right may end there on the second swing as the rest of the hole is downhill along a narrowing tightrope. The cliff-side 15th and 16th holes are also an adrenalin rush though both are upstaged by the awesome raw drama of the monstrous par five 17th, which is initially blind across a crest but then dives down along the cliff edge. From here you climb nearly one hundred steps to reach an 18th tee box placed beneath the famous Old Head lighthouse and enjoying wonderful views down the incredible Irish coastline.

Despite widespread fame and acclaim Old Head continues to divide opinion with some convinced it is god’s gift to golf and others believing that ‘all it lacks is good golf holes’. The average golfer, however, will struggle to find anything that surpasses the Old Head experience and though purists can argue the merit of its holes individually, they cannot dispute the fact that it is one of the most spectacular courses on Earth. 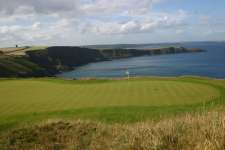 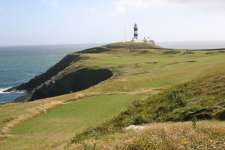 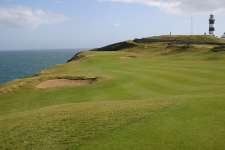 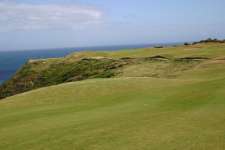