One of the first dozen golf clubs in Ireland, The Island Golf Club was founded by a group of members from Royal Dublin frustrated that their club did not allow golf on Sundays. In 1887 four such men rowed North Dublin village of Malahide to a spur of land to the North known locally as the Island, to survey the land for a possible golf links. They liked what they saw, leased the land and then laid out the holes through valleys between the dunes and ridges. From 1890 until 1973 the members here had to row across this same channel to get to golf, an entrance road now cutting the trip and ensuring the links are more accessible and also more busy on those sunny summer days.

Surrounded by water on three sides, this is one of the most exposed links sites in the world and also potentially one of the windiest. Although the likes of Eddie Hacket and Fred and Martin Hawtree have altered and upgraded the holes here, the course still exudes a charming sense of timelessness with its fairways meandering through a series of medium sized dunes and across flatter areas with smaller rimples and undulations nicely incorporated into the design.

The routing is unusual, and the start with eight short to medium length par fours is not ideal, but the 4th through 8th is a fine set of holes that are both varied and interesting. The 8th especially good, a true risk/reward driveable par four with a fine green site. The main talking point, however, are the holes closest to Malahide and the former Jetty, the 13th, 14th and 15th which are surrounded by water and play over some of the best land. The 13th has a high plateau green close to the waters edge while the 14th is the narrowest hole imaginable with its fairway subject to strong cross winds and seemingly only a handful of paces wide. The 15th is then a funky five across some rough undulations and a couple of ridges toward a large dune that frames a delightful green site.

Not one of Ireland's best known links, but the Island Golf Club is a charming experience and one of the most fun to play. 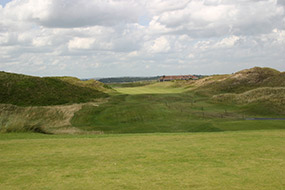 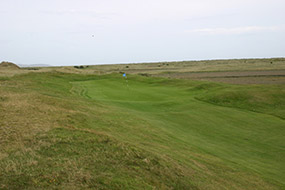 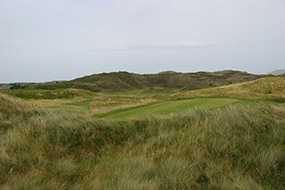 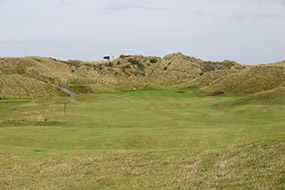