‘Everything about Waterville is spectacular, the setting is one of the best I have seen anywhere in golf’ Tom Fazio

As unlikely a combination as extravagant American architect Tom Fazio and a quaint village links may seem, at Waterville, along Ireland’s Ring of Kerry, an unexpected transformation has further strengthened the town’s historic ties with its frequent American visitors. Golf here can be traced back to 1889 when a nine-hole course was built primarily for workers from a trans-Atlantic cable station built in the village. Abandoned by the 1950’s, when the cable station ceased operation, the links lay dormant until an Irish-born American, John Mulcahy, bought the land and employed the prolific Eddie Hackett to design the new Waterville links.

Located along the Atlantic Ocean, on a peninsula of land bordered by an estuary of the Inny River, the Hackett design included a front side built over less exposed terrain away from the coastal dunes and a back nine that occupied rugged sandhills and touched both the mouth of the Estuary and the Atlantic’s shoreline. Opening in 1973, the original Hackett course was the longest in Ireland but oozed old-world charm. It amassed itself quite a devoted and loyal following until sold in 1987 to a small group of Irish Americans who later embarked on what seemed a radical renovation program with architect Tom Fazio.

The Fazio project started in 2002 and involved redesigning a number of the flatter greens, replacing the 6th and 7th holes and remodeling the less dramatic outward nine to provide more dune contours along the lower inland portion of the property. He also moved greens on 2, 15 and 16 and tightened landing areas on the long 18th making it a classic closing par five along the ocean that rewards aggressive and well played shots close to the beach. With the possible exception of an over-shaped 6th hole, the changes have been a big success and, to Fazio’s great credit, the new Waterville still feels about a hundred years old.

Though the early holes toward and along the estuary are very solid, the best golf comes later in the round from the strong par four 9th hole and through most of a superb back nine. Snaking through a rugged dune valley, the three-shot 11th is terrific as are approaches into the softly rising 10th, 14th and 15th greens. Also memorable is the par three 12th, played across a deep sandy crater where Catholics used to huddle for secret mass during the 18th century, when it was illegal in Ireland to do so and punishable by death. The closing run from the 14th is particularly strong and includes Hackett’s wonderful par three 17th and Fazio’s finest work, the 16th, where he removed a string of bunkers on the outside of the dogleg and shifted the tee closer to the river and the green closer to the ocean to create a cracking mid-length four along the sea dunes.

Still one of the longest layouts in Ireland, the one minor criticism of Waterville is that it lacks subtlety. The par threes are all strong but a clever short one or a genuine drive and pitch hole would have done wonders to break up the challenge. Nevertheless taking a low-key links designed by a true minimalist and handing it over to Tom Fazio to tweak was an enormous gamble by the club’s owners, but one that has thankfully paid off in spades. 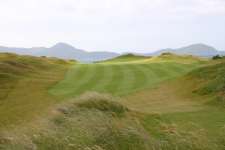 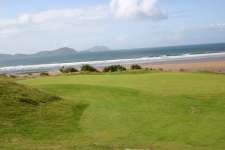 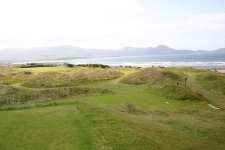 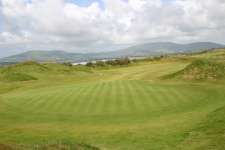 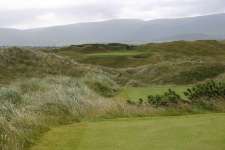