One of Italy's most highly rated golf courses, the Le Betulle layout at Gollf Club Biella was designed in 1958 by John Morrison through an attractive birth forest to the north of Milan. The property itself is especially pretty in Autumn (Fall) but the surrounding mountains provide an imposing backdrop to the golf for most of the year.

The visual stimulus of Biella, however, is quickly forgotten once you tee off, especially as the opening five holes are rather disappointing. Things do get much better from the 6th, with a number of really effective green sites on small rises, picturesque fairway settings and solid bunkering, but this course needs a serious overhaul and partial redesign to warrant the reputation it has among the European golfing fraternity. There are a few good holes at Le Betulle, and a naturally occurring creek is well incorporated into the 12th hole, but the 13th, which features a terrific plateau green site, would be outstanding if its target were pushed slightly left beside the creek. On the front nine the approach into the 6th green is a lovely rising shot with a great trap cut into the slope short and right of the green. The 7th is then has pretty drab hole, but it does have a really cool green with two gentle tiers. Similarly the 9th is way too narrow from the tee as you need to pierce two huge oak trees, but again the approach and especially the green is very good - especially in Autumn with the birch changes colour.

On the back nine the 10th is a fine valley par three, the risk-reward 12th along the creek and squeezed beside a long ridge is also good, as is the unusual par five 16th, where you drive along a shelf before plunging down and left toward a dangerous hillside target. The backdrop is very dramatic here as well, but sadly it's the end of the good golf as the final two holes are not quite up to this standard.

Biella comes recommended for its scenery and some enjoyable golf through the middle of the round. Things are looking a little tired unfortunately, and the shaping across the property is pretty rudimentary, but with some careful restoration and redesign this would be a fantastic layout. 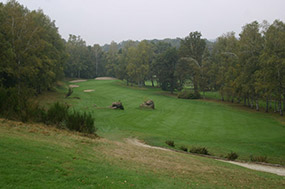 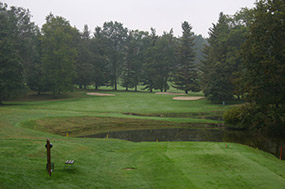