Founded in 1903 by British Embassy workers, who also laid out the first course, the Acquasanta is the oldest golf course in Italy and one of the most memorable places to play anywhere in the world. The club is located just a few kilometres from the heart of Rome, and dominating your memory of the round are views on the front nine of the ruins of Ancient Roman Aqueducts. There is more to recommend than great views, however, as the ground slopes nicely throughout the property and there are a bunch of really funky, cool holes to play here.

The most celebrated hole is the par five 7th, which sweeps left around a hill with a glorious view of the aqueducts beyond the green and above the trees. The ruins are certainly striking, as are the many water carrying ditches that run across fairways - a reminder of how interwoven historical artifacts and modern life in Rome really are. There is also a view of the famous ruins beyond the 5th, which is a par three and, like the 7th, gets more favorable reviews because of its outlook. A superior short hole is the lovely 11th, played across a creek, while the longer 17th, which crosses two ditches, is also a fine hole. As are the 8th and 16th, both over interesting land but perhaps a little tame for longer hitters, and the plunging par four 9th, which heads down and through a narrow valley between small dunes.

In terms of the routing here, there are space issues but the current plan does well to get as much good golf out of the ground as possible. The opening nine basically loops around the perimeter of the property and features several sidehill stances, while the back nine heads the other way through the interior creating a Muirfield-like routing of great variety. Most of the greens and bunkers are rudimentary in appearance but they are usually well positioned and help create a sense of this being a fun course, rather than a taxing torture test.

One gets a great sense of Rome and the significance of this city while playing Acquasanta, this isn't the best course from this vintage but it's historic, fun and could be sensational with the right approach to restoration. 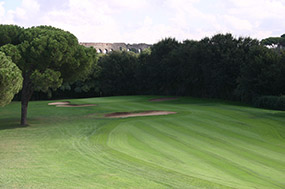