Created by Robert von Hagge and his partners, the Is Arenas Golf & Country Club is situated near the west cost of Sardinia, in the center of the Mediterranean Sea. The site itself is covered in pine woods, but boasts a particularly fertile sandy base with some interesting small dune structures and plenty of decent golf undulation

The front nine here opened in 1999 and the second in 2000, yet the future of the club was still in the air four years later when we visited and noted bunkers with more rock than sand and fairways and greens still yet to be fully grown-in. For Sardinia this is quite remote, and there isn't the local golfing base to sustain a club like this, and despite its good points, probably not enough quality in the layout to attract sufficient mainland or overseas members.

Design wise this is a mix of styles, there are some nice built-up greens and clever chipping areas but also copious mounding on fairway edges and around the green sites. This place is undulating and sandy enough to do without the artificial additions. Von Hagge and his team like to frame greens with such shapes, or with flashed back bunkers some of which are very effective on this topography. There are also a few really exciting holes to play here, particularly later in the round like at the 15th and 17th, the latter with the only sea view on the course. The routing itself starts and finishes among the small Sardinian pine trees, with the central areas out amongst the more open and scrubby parts of the site. The contrasting landforms are quite well handled and the design team get most of their credit for crafting what is a pretty memorable and interesting course for this part of the world.

With some financial support and a more golf-savvy developer at the outset, we feel this could have been an outstanding golf course for Italy. As it stands, this is still pretty good golf and worth checking out for those holidaying on the wonderful island of Sardinia. 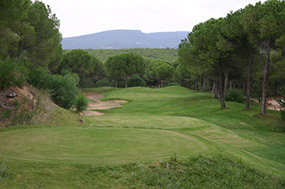