The dream was to create Europe’s finest golf destination. The vision was that of hotelier Sir Rocco Forte, a passionate golfer who apparently scoured the Mediterranean coastline in search of the perfect site upon which to build a luxury resort for a discerning, high-end golf market. Remarkably, given its location, reputation and lack of golf amenities, his quest brought him to the southwest shores of Sicily, an Italian island better known for its links to organized crime than any propensity to organized recreation, like golf.

Forte’s initial problem was that his chosen site was comprised of more than 70 individual parcels of land. Unperturbed, over a period of years he acquired the necessary space to build his great sprawling dream and appointed Kyle Phillips to create a golf-centered Masterplan that would include two full layouts and a nine-hole par three course along with a superb five-star hotel, conference centre, beach club, restaurants and Europe’s largest spa.

Sensibly, Sir Rocco prioritized the golf and allowed Phillips to pick and choose the best parts of the property for his two main courses. Although both East and West are built to the same standard and occupy similar ground, they provide alternate journeys. The West is more an out-then-back type arrangement with a stirring four-hole seaside finale, while the East enjoys a two-loop routing that changes direction more frequently. Its 18th hole plays right alongside the cliffs but the rest of the closing stretch is set on higher, tumbling ground.

With more than a mile of beach frontage available for golf, it would have been easy for Phillips to build one course along the coastline and have the other set away from the water. There was plenty of natural undulation through the deceptively spacious interior, however, and the designer wisely chose to spread his best holes, and best terrain, across both courses. Each is routed so as to twice touch the blue waters of the Mediterranean and to finish right alongside the Sea.

While the West Course incorporates more coastal land, it’s slightly less impressive due to an early stretch of consecutive holes along the eastern boundary and a few fairways that feel a touch tight given the exposed nature of the site. The beachside holes are the star attraction, particularly the two-shot 8th and the run from the 15th through to the 18th in front of the boutique hotel.

Despite its closing holes lacking the glamour of the West’s, the East Course is equally memorable and noted for its undulations and more frequent directional shifts. Highpoints include the short par four 3rd, early water holes at the 5th and 6th, the intimidating ridgetop par three 12th and semisunken green at the 13th. Nearer the sea, both the 14th and 15th are long holes that plummet across glorious linksy ground while the 16th is a delicious par three played into a wickedly shallow target. The finishing duo are also strong; the penultimate hole rising gently into the foot of a Sicilian hillside, and the closer crashing from an elevated tee right along the craggy coastline.

Although its dramatic seaside holes are likely to live longest in your memory, the great thing about Verdura is how consistent the holes are across both courses and how fun and interesting the rolling fairways and greens play. Best of all, the luxuriously appointed hotel is within easy reach of some of Sicily’s finest little villages, making the Verdura offer one that is difficult to refuse. 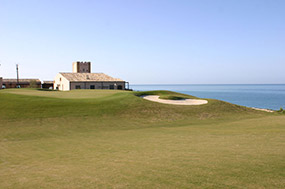 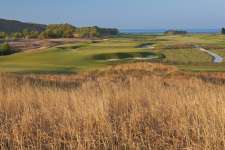 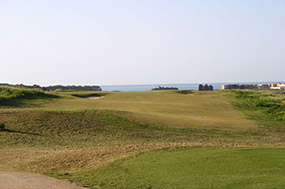 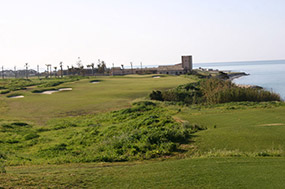 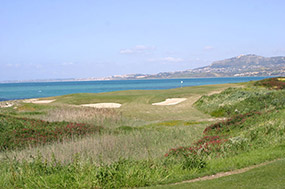