Strategically located in the lush hilltop setting of Bukit Kiara amidst the prime residential area just eight kilometres from the capital city, lies the home of the first Tournament Players Club (TPC) in Southeast Asia, the TPC Kuala Lumpur.

TPC Kuala Lumpur; formerly known as Kuala Lumpur Golf and Country Club (KLGCC) officially joined the highly acclaimed network of golf courses affiliated with the PGA TOUR on the historical date of 24 August 2016. It fits the highest standard of the PGA TOUR as a complete tournament-standard golf facility.

TPC Kuala Lumpur is well served by major highways with excellent accessibility to and from the heart of city centre, making it the perfect place for both business and leisure. The clubhouse is surrounded by nature preserves and is home to some unique species of flora and fauna. It is a serene, thoughtfully planned environment of relaxed elegance and natural beauty.

The club has also had the rare privilege of successfully hosting major international tournaments such as the CIMB Classic, Sime Darby LPGA Malaysia and Maybank Malaysian Open all within a year for three consecutive years between 2013 and 2015 – a feat no other clubs in the history of golf has accomplished. World renowned past winners such as Justin Thomas, Ryan Moore, Pat Perez, Cristie Kerr, Jessica Korda, Shanshan Feng, Anirban Lahiri, Lee Westwood and many more had graced the 36-hole Championship course with pride and glory.

Originally opened in 1991, the year 1997 marked a milestone for the club’s history when it was acquired by Sime Darby Property, Malaysia’s leading real estate development company. Following that, TPC Kuala Lumpur’s West and East Courses were completely redesigned and re-opened in 2008 and 2010 respectively. The immaculately manicured East Course greens and fairways are Paspalum Seashore Grass variety.

The multi-award winning West Course again underwent enhancements between November 2017 and August 2018 to deliver improved playing surfaces with more developed and enhanced grass species that are identical to those at TPC Sawgrass, home to The Players Championship which is the PGA TOUR’s annual flagship tournament in the United States. Whilst TifEagle Bermuda grass has been planted on the greens to provide a consistently fast and true putting surface, Celebration Bermuda grass has been planted on all the tee boxes and fairways, as well as bunker and green surrounds.

In addition, design modifications were made to some holes; construction of a new 80-yard short game practice area plus a new and larger practice putting green. 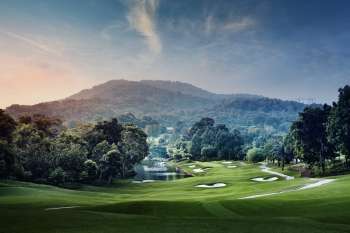