‘At Cabo del Sol it was apparent that the closer the routing got to the edge of the ocean, with the desert vegetation, the more exciting and unique the course could be.’ Jack Nicklaus

Nicklaus Design’s most celebrated resort course, the Ocean Course at Cabo del Sol is part of a massive 1,800-acre residential-resort development that revolutionized the Los Cabos region and helped popularize holiday golf in Mexico. The course is a mixture of sea and desert golf with each hole cut from a natural desert landscape but those on the exterior touching the blue waters of the Pacific and boasting some of the most exhilarating ocean frontage in all of golf.

From a central clubhouse the course is arranged in a large figure eight with three holes on each nine occupying the prime coastal estate and providing most of the highlights. It is Jack Nicklaus’ belief that ‘the strength of an oceanfront golf course is the quality and variety of the inland holes’ and thankfully away from the sea at Cabo he managed to design several gems. These include a couple of strong par fives and the difficult par four 10th, which drops significantly from the tee and then features a brutal approach across a rock-strewn valley and into a shallow green guarded by deep bunkers and cacti. The shorter but more narrow 14th is no less intimidating as you drive over a deadly arroyo that snakes along the left side of the fairway before cutting back in front of the green. There are also a few real brutes such as the long plunging par three 13th and the uphill 8th, its approach across a large sandy wasteland and deep frontal bunker is one of the most demanding anywhere.

Despite these interesting interior holes, the Nicklaus course at Cabo del Sol is all about the ocean and it is the coastal stretch of the 5th through 7th and 16th through 18th that draws the masses back here year after year. The 5th is a lovely par four that falls and bends toward a creative bunkerless green with a fabulous sea backdrop. Both the 6th and 17th are par threes built atop granite outcroppings, the penultimate hole playing straight across a pristine white sandy cove to a cliff-top green pressed hard against the surf. The 18th then hugs the coast as it curves along the shoreline, the fairway giving a strategic advantage to those able to drive close to the water as a central or safer left side drive leaves a frightening approach played directly toward the Pacific and with little room for error. This exciting hole is arguably the finest closer in the bulging Nicklaus portfolio.

The Ocean Course has evolved and changed considerably in its relatively short life with even the famous seaside holes being placed under the knife on more than one occasion. After inexplicably being shifted 40 yards inland, the 16th green has since been moved back against the coastline and lowered by several feet making the downhill approach, straight at the ocean, even more spectacular. Both the 6th and 7th were also rebuilt after opening, the 6th pushed into the rocks and the 7th pressed hard up against an untouched beach. The greens, which opened unusually flat for a Nicklaus track, have been reshaped and now have more than enough movement to keep things interesting without going overboard. Several fairway traps have also been added or altered to temper technology. The resort’s growth has had an impact on the course as well, most notably from places like the 5th tee where multiple hotel developments have cramped the driving visual.

Jack Nicklaus was very conscious of the opportunity he had to create something special at Cabo and sensibly focused hard on ensuring that the nines were balanced and the inland golf was up to the standard of the seaside holes. One of the most photogenic layouts on earth, Cabo del Sol’s Ocean Course is an extremely impressive achievement with the designer able to extract fine golf holes out of the best parts of the property. The course does have a few indifferent moments and some uninspiring terrain, yet the sensible placement of the most dramatic coastal holes toward the close of the round ensures golfers end their day on a huge high, which is great for generating repeat business and has no doubt helped establish this resort’s enormous international profile.

The Ocean Course at Cabo del Sol was recently redesigned and reopened in early 2020 as part of The Cove Club, a private facility for residents at Cabo del Sol. Among the changes to the Ocean Course, were several new holes and a rerouting to turn the old downhill par four 16th into the final hole on the layout. We assume that as a result of the work done the famous beach-carry 17th and ocean-side 18th holes were both lost to real estate, which seems a shame. 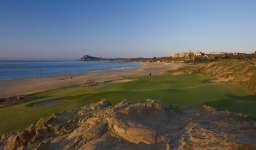 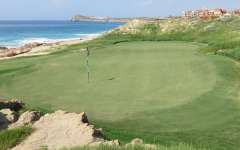 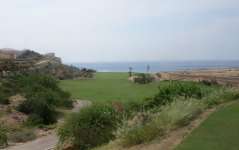 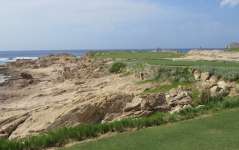