A short drive from the successful Cabo del Sol Resort, Chileno Bay is an ambitious estate development on prime seaside land between the charming resort town of Cabo San Lucas and the bustling San José del Cabo. Designed by Tom Fazio, the golf course enjoys views of the Sea of Cortez but like his Querencia layout is set much further back from the shoreline than other courses in the Baja region. Construction actually started on this project prior to the Global Financial Crisis, but was halted when the Cabo property bubble burst.

Despite the lack of absolute water frontage, Chileno is good golf with much of the course removed from the planned housing pockets. The routing is more walkable than Querencia, and the holes attractively built with sprawling waste-style bunkers into the vegetation and more formal traps within the turf areas.

Fazio appears to have taken chances with his design work here, given some anorexic green sites, split fairway landing areas and uncharacteristically unkempt bunkering. His layout includes a nice set of par threes and some fine longer holes with both distant sea views and interesting ground undulations. Several holes are spoiled slightly by too much sand through key golf corridors, but Fazio did well overall in a desert environment to show restraint and build a fun, attractive course that most visitors to the region would enjoy.

After a couple of false starts opening Chileno Bay, the course was finally ready for member play in late 2015, around the same time the housing product was returned to the market. Whether the high-end private club model upon which the course was built is sustainable only time will tell. If not, public golfers will be in for a treat, when tee times at Chileno become available. 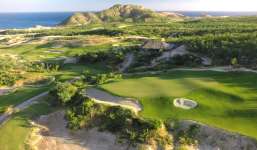