An extraordinary property on the southern tip of the Baja Peninsula, Quivira partly overlooks the Diamante development and was conceived as a similarly large-scale golf and residential precinct. The difference between the two projects is the routing of the golf and the fact that Diamante decided to at least attempt to build walkability into their two layouts. No such efforts were made at Quivira, with Nicklaus Design essentially setting holes anywhere they wanted and linking areas by cart paths.

The shame of Quivira is the potential, given its close proximity to Cabo San Lucas, the apparently lax rules about building down by the beach and some absolutely stunning views of the blue Pacific coastline. Some of the golf here dangles on the sides of sheer cliffs, while in other areas play is taken down toward a sandy shoreline, and then straight back into steeper dunes. The course photographs extremely well, but the routing will leave experienced golfers frustrated by the absurdity of 700-yard uphill climbs between holes and blind shots where you can’t get a feel for where you should be aiming.

On the positive side are attractive approach shots into the 7th, 11th and 12th greens and beautiful coastal holes like the short 13th, which resembles the 16th at Cabot Cliffs for the manner in which a small green is pressed onto a rocky ledge and angled from left-to-right. The climbing par four 8th is also good, and has a real Monterey Peninsula feel to it. As does the 18th whose green is literally pressed right back onto the beach. Sadly, much of the rest is either excessively narrow or excessively penal.

No doubt that many golfers will enjoy the views at Quivira, and the chance to hit their ball into the Pacific Ocean on several holes. Those who take design and routing more seriously, however, are likely to be less impressed and to instead judge this course against what it could have been. 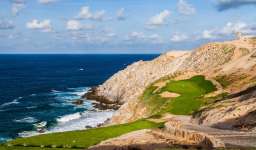