Designed by Robert Trent Jones and opened in 1971, the Red Course at Royal Golf Dar Es Salam is arguably the best known tournament course in Morocco. It was ranked among the World's Top 100 courses as recently as the early 1990s.

The present Red Course at Royal Golf Dar Es Salam was redesigned in 2017-2018 by James Duncan, a long-time associate with Coore and Crenshaw design. The Duncan changes were mostly to the greens and bunkers, and aimed at providing professionals, in particular, with a modern test of shot making and clear thinking. The bunkers are generally deep and punishing, while the greens feature some fierce contours and are especially difficult to recover around if out of position. Golfers need to plan their way carefully from tee through green, in order to give themselves the best chance at par or better.

Although the Red Course is somewhat flat and narrow, the established trees, attractive bunkering and well conceived green sites make it a delightful place to play. There is more than a hint of Coore and Crenshaw daring within some of the green complexes, such as the large lump in the 1st green and the outrageous contours and double bowl arrangement on the fun, drivable par four 17th. Among our favourites were the beautifully bunkered par three 2nd and 14th holes, the long 8th and lakeside 12th, with their fun greens, and the strong, bending par four 16th. 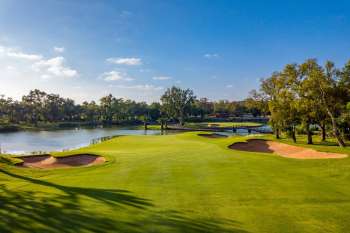 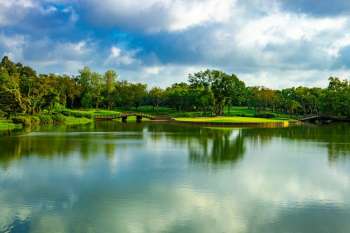