Founded in 1915, the Noordwijkse Golf Club was based out of a nine-hole links until 1971 when its land was acquired by local authorities in Noordwijk for a housing project. Forced to move, the club then shifted a little north of the town and into a heavy duneland property close to the North Sea that had enough room for a full eighteen-hole layout. While the new site is blessed with mostly ideal golfing terrain, it does also include dense woodland areas that are unfortunately over planted and interfere badly with several holes, especially on the less consistent front nine.

The modern Noordwijkse was designed by Englishman Frank Pennink, apparently with the assistance of club Secretary Paul de Jong, and is a difficult links with most challenges provided by the enduring winds and dangerous bumpy linkscape. Pennink’s routing takes you to all points of the compass with holes laid out across some pretty dramatic sandhills. Sensibly on such an exposed site the holes are not over designed, most greens are small, flat and generally flanked by single traps. Aside from the native rough areas and tall pines, from the tee there is an absence of driving hazards with the only fairway bunkers coming on the 18th and seemingly built to protect the 17th tee.

The holes cut through the trees are the links clear weakness as over the years they have become terribly narrow, almost to the point of being claustrophobic. The ground is mostly very good for golf, however, and were the 4th through 7th and the front of the 11th cut back the club would uncover some fine holes, especially the difficult 5th and the narrowing funky 4th hole which has an out of bounds running down the left side of a falling fairway that demands a left sided drive.

Within the open and exposed duneland the standout holes include terrific rolling par fives at the 2nd and 11th and the short par four 8th played over a rise then down and around some decent sized dunes. Strong links holes like the 10th, 13th and 14th are also good while the 15th and 16th are both mid-length par fours built on superbly pitching golf land that feature excellent green sites. The disparity between the quality of holes is perhaps best illustrated on the par threes, as the 17th is a tremendous long shot into a dune ledge and vastly superior to the previous short holes which are all amongst the trees and disappointing despite some interesting land.

While there is no doubt that the setting here is conducive to good golf, the course would be greatly improved with some serious clearing of its heavily wooded areas. As it stands, there is still much to admire about Noordwijkse but, in truth, the current layout is a notch below the best in Europe and a long way from fulfilling its true potential. 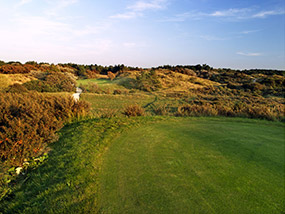 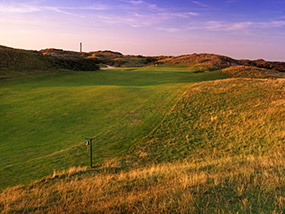