Courtesy of the Utrechtsche Golf Club

The Utrechtse Golf Club was formed back in 1894 and moved to an attractive forest outside of Utrecht in the 1920’s, with Englishman Harry Colt responsible for the design of its new golf course. The Colt creation, De Pan, was completed in 1928 and remains one of the game’s true hidden gems.

Heavily treed and laid out over wonderfully undulating sandy terrain, the best holes at De Pan are covered in the same magnificent heather that typifies heathland golf in Britain and are among the most unique on the European mainland. Examples include the par three 15th, with its narrow green cut into the side of a dune, and the long rolling 6th hole, played over a rise and then around a large hill that obscures much of the green and a knoll that eats into its right side. Best of all, however, is the utterly original 10th hole, which is a gorgeous short four played through a small saddle gap between two big hills. Elsewhere the 4th green, the second half of the 5th and the short par four 7th, played over a dune and then around another, are also great fun. The 11th is another fine long hole while the closing stretch from the 15th is particularly attractive, the driveable par four 17th a real standout and routed through and then across a healthy cover of heather before the small rise into its excellent green site.

The second oldest golf club in Holland and one of the nation’s most private, the course at De Pan is pure Colt and pure class. 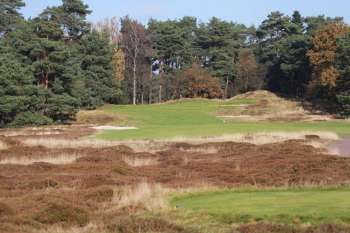