North of Auckland, the Gulf Harbour Country Club is the classic example of a residential golf development where the course is used to sell land, and holes are therefore compromised by having to share prime real estate and be cut through all the housing.  The housing on the front nine is more intrusive, but on the back some key plots of land were designated residential at the expense of the golf, cliff-side on the 17th, for example, or right of the 14th fairway.

Designed by Robert Trent Jones II’s company, the layout has some obvious appeal with the views and cliffs, but too much of the design is slanted toward what looks good rather than what plays well. The round begins rather tamely, with some decent, mild holes but few real standouts. The 4th is a decent hole but far too close to the housing, as a huge wire fence is needed to protect the homes. The 7th hole along a lake is quite good as the green buts up against the water and gets shallow the safer you play from the tee.

The back nine is much more interesting and features the standout moments, including the hillside green on the par three 13th and the stunning views from holes 15 to 17. Each of these glamour holes are fun to play, the 16th is most noteworthy as the fairway doglegs around the cliffs and along the water with long, straight drives being fed to the right and toward the green. The 17th hole from the very back tee is a super driving hole, the approach played over a gully and toward a target that could have been pushed closer to the cliffs if not for the real estate.

Throughout the round at Gulf Harbour, there are signs of classic RTJ II strategy on the dogleg holes, bunkers are placed in the neck of the fairways and cut the distance of approach for those who flirt with them, but additional greenside traps often make the desirable line away from the traps off the tee. The greens themselves are reasonably interesting, a few feel contrived but most of the slopes are appropriate for the nature of the approach. In terms of the individual holes, a few stand out as attractive visually, and the par threes are all effective, though similar, but, like the course itself, the best here are most accurately described as decent but compromised. 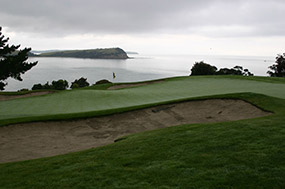 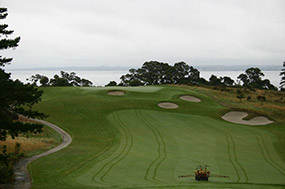 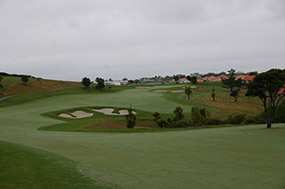 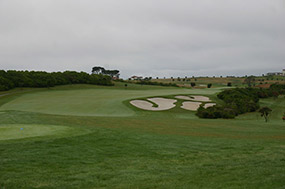