Taupo Golf Club can trace its history right back to 1928, though it is believed golf was played in the area before then, even though no formal club existed at that time.

Taupo Golf Club owes its existence to Vivian Fail, a keen golfer who moved here in 1928. Mr Fail set up a steering committee to consider developing a course and approached the authorities with the hope of securing a suitable piece of land. His negotiations proved fruitful and work began on what was known as the “TaupoExperimental Block” – experimental to see whether it was possible to grow grass on pumice successfully. Successful it was – nine of the current Tauhara Golf Course’s holes currently sit on this piece of land.

The area was cleared of scrub by voluntary labour. Initially seven holes were developed but they were soon followed by a further two to create a nine-hole layout of 2,779 metres with a standard scratch score of 36. The nine-hole course was officially launched at a Labour Day tournament in 1931.

In the mid-1930s a clubhouse was build courtesy of the Domain Board. Mr W. Morice was appointed the club’s professional and greenkeeper and the club was ready for golf.

Then came the Great Depression. Progress stopped, the scrub and the rabbits returned and Mr Morice had to be retired.

In 1936-37 the economic climate improved and the club breathed again. Progress made was again interrupted, this time by the Second World War. The club went into recess but members of the Home Guard continued to play on it after their manoeuvres on Sundays. The club maintained viability and became affiliated to the New Zealand Golf Association in 1941.

Such was the popularity of Taupo in the ensuing years after the war that the need to expand the course became apparent and the club’s professional at the time, Mr E. Southerden, was asked to design a second nine holes.

A full 18-hole course of 5,667 metres was opened by the then President, Mr Laurie Cheal, and Mr Joe Story, the Mayor of Taupo.

The club had already played host to several notable tournaments by the time New Zealand legend Sir Bob Charles played here in an exhibition with the popular Taupo professional Jim Clelland in 1969.

A bigger and better clubhouse (the current building) was opened in 1973, centrally placed and with access from Centennial Drive.

The Taupo area was really starting to boom around this time – with tourism,business and farming all expanding – so it was determined that a second 18-hole course was both desirable and sustainable. Two proposals were looked at, but the one agreed upon was on land adjoining the existing Tauhara Course. The club acquired 180 acres of land and Mr Southerden, along with Mr Cheal, the Taupo surveyor, set about designing an 18-hole masterpiece. It was eventually to measure 6,025 metres, with a standard scratch score of 73.

The Centennial Course was officially opened by the local Member of Parliament, Mrs R. Stevenson, on 7 September 1973. Recognition was not long in coming, with Taupo Golf Club chosen to host an important national competition, the Freyberg Rosebowl, just five years later. 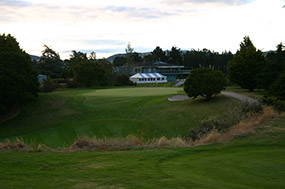 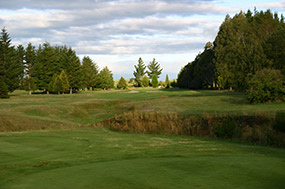