Meaning ‘Fringe of Heaven’ in Maori, Titirangi is a golf club situated on the outskirts of Auckland that houses the only golf course in New Zealand designed by the great Dr Alister MacKenzie. The club was created in 1914 on a course built by its founding members, MacKenzie redesigning this layout during his whirlwind Australasian tour of 1926. The famous designer spent two weeks on site at Titirangi changing each of the club’s eighteen holes without substantially altering its routing.

Apparently pleased with the property at his disposal MacKenzie described the ground as ‘exceptionally well adapted for golf, undulating, without being hilly’. Although not quite as dramatic, nor as consistently suitable for good golf, as the best land he worked with on Melbourne’s Sandbelt, the end result is still a solid golf course and a real hidden treat for MacKenzie enthusiasts.

Most holes here are laid out nicely across the undulations and cut through tall exotics and native New Zealand bush and rainforest. The property does get quite narrow in places and as most holes run north and south they do occasionally get a touch cramped. As is the case on many MacKenzie projects, however, his cunning design actually feels more spacious and plays considerably longer than the scorecard suggests.

The genius of the design is most evident in the par threes, the triple tier 7th green, cross gully Redan-styled 11th and four level, two ridge 14th green all absolute gems. The 7th green actually feels a little like MacKenzie’s beloved 16th at Pasatiempo in California, with other similarities between the two courses evident throughout the site. Of the longer holes, the most memorable are those with the heavier contours such as the 3rd with its dangerous raised green. The wild 6th, dissected by a major diagonal ridge and played up into the hilltop tiered target, is also very good as is the fine risk-reward cross gully par five 13th. Also worthy of mention is the tight 16th with its jumbled fairway and slim plateau green, and the valley approach into the gently rolling par four 10th.

With years of slow deterioration taking its toll on the course, the club embarked on a significant masterplan program in the mid-1990’s using MacKenzie’s surviving routing maps and individual hole drawings to return the course, where still possible, to something near his original concept. Problems with over planting were also rectified with the sensible removal of many interfering trees and bushes. Carried out by architect Chris Pitman, the work has been a success and while the course is still a distance behind the good doctor’s best efforts across the Tasman, the improved Titirangi is nonetheless a terrific test and a thoroughly enjoyable days golf. 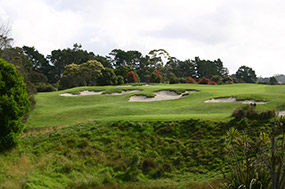 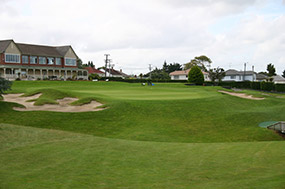 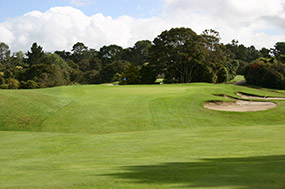 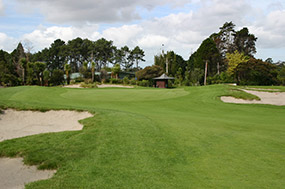