Set amongst picturesque panoramas in the south of Auckland super city is New Zealand’s brand new golf course, Windross Farm. A welcome addition to the North Island golf course offering and a facility that promises a very special golfing experience.

The new course traverses 60 hectares of pristine farmland with 360 degree views of spectacular tree lined hills and lush green countryside. Windross Farm has been developed as a unique links-style course that offers a mixture of flat and undulating ground, man-made lakes and strategically placed dramatic bunkers to offer the best of golf and the natural environment. Both the clubhouse and facilities have been designed with a minimalistic and understated philosophy in mind and they truly complement the unique golf course, to complete the overall picture.

The grass types chosen for all playing areas was also a strategic decision and in the end, it was decided that a fescue mixture would be used on all fairways, tees, green surrounds and rough, with bentgrass as the preferred putting surface. This has not only provided an excellent playing surface across all closely mown areas, but has given the course a magnificent contrast in aesthetics and texture whilst creating some spectacular views. Drainage of the golf course was also a major priority during development and construction and this, along with a very easy walking layout, allows the course to be playable year round.

Just 30 minutes from the Auckland CBD, Windross Farm offers a utopia of golf heaven being a very playable, yet challenging, course immersed in charming surrounds where everybody has a chance to score well. As an enjoyable and unique golfing experience, the course has already received fulsome praise from some of New Zealand’s golfing greats and officials.

Designed by Brett Thomson, of RBT Design, with course consultant, Phil Tataurangi, the course is known for its challenging degrees of interest. The layout is a traditional par 72, with returning 9’s of par 36. Each nine consists of two par 3’s, five par 4’s and two par 5’s. The par 3’s are designed to play in all directions of the compass while the par 5’s have been designed with the prevailing wind in mind. It is intended that the 2nd is a three shot hole for most players, the 15th and 18th being of medium length and the 14th a short par 5 that will entice most to attempt reaching the green in two shots. The downwind 15th plays as a drivablepar 4 for those wishing to attempt it.

The course provides multiple start options from either the  1st, 10th, 12th,or 15th with the 9th, 11th, 14th and 18th holes finishing back at the clubhouse. Both nines are of similar length but play quite differently with varying design elements and the influence of wind direction. Apart from the undulating greens, 38 bunkers and minimal tree presence, the major feature of the course is the water in its many forms with four large lakes interlaced with numerous burns (streams) threading their way in and out of impressive, yet imposing, wetland areas. 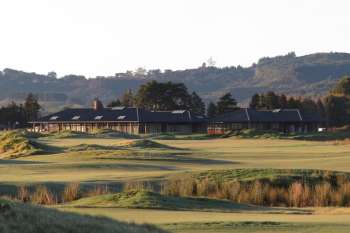 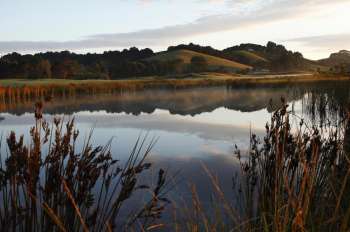