One of the most surprising golf experiences anywhere in Northern Ireland can be found a short drive from Royal County Down, at the stunning Ardglass Golf Club. Founded as a seven hole links in 1896, Ardglass did not expand to a full 18 holes until the 1970s. The club’s current course includes three holes designed by David Jones when additional land was acquired in 1998.

Almost half the holes at Ardglass follow the coastline, including a couple set directly against the water and several others atop dramatic cliffs that offer panoramic views across the Irish Sea toward the Isle of Man. There are better golf courses in Ireland for certain, but none that match this one view-for-view across an entire layout. The opening stretch is so jaw-droppingly beautiful that the first inland holes are almost a relief; such is the risk of sensory overload here. None of the design would be described as more than rudimentary, and certainly the seaside holes steal all the attention, but on a site like this the general inclination to under-design, rather than over-design and complicate, holes was appropriate.

Among the lasting memories of Ardglass are the opening tee boxes, which are pushed up against perhaps the most interesting clubhouse in all the world. Said to be haunted in certain sections, the site includes a stunning medieval Castle and old stone Warehouse dating back more than 600 years. The hole itself is a short par four that follows the coast, toward a green tucked into a gorgeous rocky nook. The next three cross ravines, look directly at the ocean and are likely to fill your camera’s memory bank by themselves. As is the stretch through the middle of the round which gets nearest the nearby fishing village, as well as the 18th hole back into the castle setting.

Though some of the middle holes are a little dull, the low-key ambience of the club, modest green fee and constant scenery make this one of the more delightful tests in all of Ireland. Were Royal County Down not such an epic destination, fewer golfing travelers would venture to this part of the world but a higher percentage that did visit would stop and play Ardglass. For those visiting County Down and finding themselves with time for that extra round of golf, all we can recommend is that you strongly consider a detour to Ardglass on your way through. It’s a difficult place to dislike. 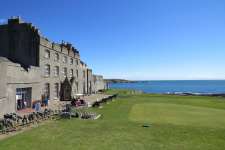 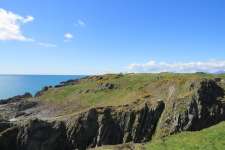 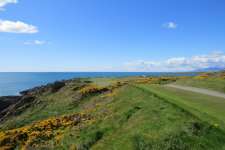 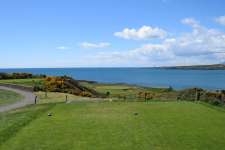