One of the genuine sleepers of Portuguese golf, the Onyria Palmares Golf Club is a throw-back old-school 27-hole golf experience, with enviable coastal views and each of its nine hole loops tumbling down a hillside toward the Bay of Lagos.

The golf club was initially established in the 1970s as an 18-hole facility, but totally redesigned in 2010 by Robert Trent Jones II’s company, who incorporated the charming beachside area into their layout and managed to extend the routing to 27 holes. Each nine ends with a steep climb back up the hill, but in some ways that is where the similarities end.

The first nine holes start inland of the elevated clubhouse and are unremarkable save for a stretch from the 4th to the 6th, which enjoy spectacular river and beach outlooks and elevated views toward the charming fishing village of Alvor. The mid-length 5th is particularly memorable for a small green site and the number of options presented from the tee.

On the middle nine, which is oriented more to the west, the golf is played more at the sea or seemingly straight toward the larger historic town of Lagos. There are some steep rises and falls through this area, as well as a couple of fun linksy holes such as the 11th, 15th and 17th. The undulations on the approach to the double green at the 17th standout, at least as much as the twice uphill finishing hole.

Arguably stealing most of the attention at Palmares, however, is the final nine, which is all about the beachside area. Although views are forsaken through this nine, there are a number of charming links-like holes set on either side of the Algarve railroad. These holes are as authentic as any old-school linksy holes you will find in southern Europe. The four holes nearest the beach are notable for a beautiful par three at the 21st, which is played toward a charming green site nestled against the dunes, and the two narrow, low-set par fives it is sandwiched between. Back on the inland side of the railway tracks, consecutive short par fours at the 24th and 25th are great fun for those courageous enough to take on the trouble off the tee, and try to drive past central fairway bunkers.

Although conditioning can be a little scratchy at Palmares and the inevitable uphill holes are a little tough on shorter hitters, this is a fine golf experience and recommended for any groups visiting the Algarve and looking for more than the standard resort fare you will find elsewhere. 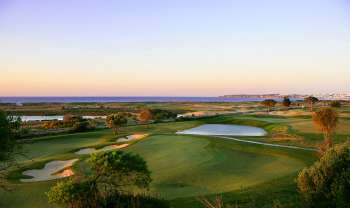