Rarely in golf do the associates of leading signature design companies get their due credit. Rarer still, do they break away from the comfort of a large, busy firm and establish solo careers in their own right. Perhaps the most successful exception in recent times has been Kyle Phillips, who left Robert Trent Jones Jr. in the late 1990s to build Kingsbarns and hasn’t looked back since. Kingsbarns was obviously significant for Phillips, as it gave him an opportunity to establish his mainstream design credentials, and build brand awareness.

On the other side of Scotland, in the sparsely populated Southern Hebrides, a similar such opportunity was presented to Greg Norman’s long-time design partner Bob Harrison, in the form of the exclusive Ardfin course on the island of Jura. Like Phillips, Harrison grasped his chance with both hands.

To appreciate just how special this project was for Harrison, it’s necessary to understand the geography. At its nearest point, Jura lies half a mile from the more populous island of Islay, home to the timeless Machrie Golf Links. Years earlier Harrison, an Australian, had fallen in love with The Machrie and made numerous trips to play the links. He initially thought the call to develop a golf course on its remote neighbor was a joke. It wasn’t, the project was very real and the client determined to build a high-quality course on a newly acquired 12,000-acre estate.

Jura has a population of under 200 and, unusually for Scotland, no golf. the Ardfin property covers most of its southern end, and comes complete with more than 10 miles of coastline and seven private islands within the Islay Sound. For decades it had been primarily used for deer stalking. Harrison had his choice of land for the golf course, and selected a narrow strip around a 19th century manor house, closest to the larger offshore islands. His opening seven holes play to the east of what’s known as Jura House, and his final 11 to the west.

A site of rare natural beauty, Ardfin differs from the other spectacular layouts in this region for the unsuitable base upon which its holes are arranged. Rather than sand and dunes, the course sits mostly on rock and clay. The fact it doesn’t suffer by comparison to any of the modern masterpieces in Britain is testament to the Harrison design, as well as the efforts of his construction team in shaping the various features.

One of Harrison’s chief tasks in designing the course was to somehow stay out of the way of the scenery, while at the same time building holes that compliment the setting. It’s a delicate balance. You don’t want golfers to sense there are superfluous compromises or that views rather than landforms dictated the routing. Equally, you can’t afford for the golf on such a site to be overwhelmed by the outlooks. Making it harder is the fact that these are among the most rugged and untouched panoramas in all of golf. Not surprisingly, Harrison aligned his holes to point beyond the narrow Sound toward Islay as well as straight along the majestic Jura shoreline. There are holes set down along rocky beaches, and others atop towering cliffs that rise hundreds of feet abruptly from the sea. Those away from the really dramatic areas are often blessed with great character or old, historic stone walls, which Harrison has used tactically within his design to force golfers to think their way through the round.

Despite obvious quality away from the coast, unquestionably it’s the holes nearest the water that will attract the most attention. These include breathtaking par threes beyond giant chasms, long holes across old stone cottages and driveable par fours toward greens perched seemingly at the edge of the abyss. In most cases the targets are small and fiercely protected. It’s not going to be an easy course to play, but equally it will be hard to forget and almost impossible not to fall in love with.

Among the obvious standouts are death-or-glory par threes at the 2nd and 10th, the latter with a delightful green and generous bailout for those reluctant to take their shot straight across the canyon. The driveable 3rd and 9th holes are also terrific, as are strategic, stone-wall par fours at the 5th and 6th, which share a communal fairway and cleverly reward golfers able to place their tee shots nearer the walls.

As with a links like The Machrie, before it was redesigned, the best holes at Ardfin are difficult to pidgeonhole or directly compare. The short par four 8th, for example, is unlike anything we’ve seen before; its tee shot wedged between a steep crag and a sheer drop off and its two landing zones separated by a stone fence. While some will criticize the forced lay-back from the tee, there are unlikely to be arguments over the approach, an exhilarating short-iron toward a pimple ledge and with all of Islay’s rugged majesty staring directly at you. Few holes wow quite like this one.

Proof of the great diversity on display across the estate, remaining highlights are spread from upland areas with elevated outlooks down to holes pressed hard against the rocky shoreline. Each of the final ten enjoys superb views of an isolated islet known as Froach Eilean, with its 12th century castle ruins. The hole that gets closest to the island, the 11th, is probably the best par four on the property, and features a lovely, broad drive and an exciting, all-carry approach across a wetland. An old stone boathouse on a spit of land behind this green has been converted into a five-star comfort station and is sure to become an iconic part of the Ardfin experience.

Following refreshments at the 11th, comes a stern closing sequence back to Jura House that starts with a demanding par three into the base of a craggy hill and continues onto a series of two-and-three shot tests that are largely unforgiving on the misfiring golfer. The most memorable of these are the 14th, with some of Ardfin’s finest vistas and most authentic golf undulations, and the multiroute par five 16th, which can be played conservatively but is deliciously tempting for those able to nudge their drive down the tighter right side.

Vastly different to the traditional links experience you expect when visiting Scotland, Ardfin is pure golf nonetheless with little clutter, no cart paths, an unhurried pace and few distractions beyond the incredibly beautiful surrounds. Playing here under clear blue skies is a real treat.

For Harrison, to have been able to work on such a landscape under his own banner and without the inevitable compromises of signature design was an obvious career highlight. In a land where golf has been played for more than half a millennium, to have built something so fresh, so distinctive and so spectacular is quite an achievement. 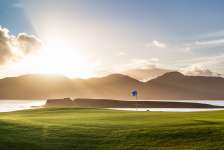 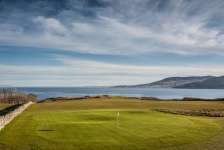 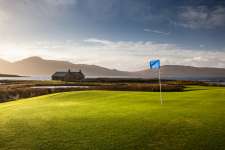 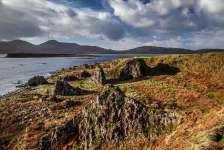 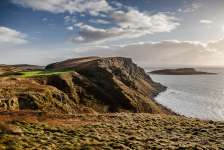