Situated along the North Sea, across the Bay from St Andrews, lies the resort town of Carnoustie. Its spacious sandy linksland have been a venue for golf since the 1500’s, though its current links were not formalized until 1842. Initially a ten-hole layout designed by Allan Robertson, the final eight holes were later completed by Old Tom Morris but revised substantially by James Braid in 1926, who shaped the course into a genuine championship venue by lengthening holes, adding bunkers and shifting most of its green sites. The Braid course was well received and successfully hosted the 1931 Open, but it was felt that the finish proved an insufficient test. Prior to the 1937 Championship a local golfer, James Wright, re-designed 16, 17 and 18 wrapping them around the menacing Barry Burn and creating possibly the toughest closing stretch in the game. Aside from the odd back tee, the course remains virtually unaltered to this day.

With the sea rarely in view and the grim industrial areas of the grey town prominent from several positions, Carnoustie is far from the prettiest links in Scotland but makes up for any aesthetic shortcomings with a strategic routing and a terrific collection of strong holes. The layout first heads out in a large clockwise arc before turning at the 11th to swing its way back toward the clubhouse. Unlike a traditional out and back routing, this unique arrangement ensures the wind quarters from every possible direction, never allowing the golfer to settle into any sort of rhythm.

One of the most relentless driving tests in golf, Braid’s fairways are defended by native rough areas that can be grown out to frightening proportions, strong winds that whip across the site and deep, punitive bunkering. Most of the hazards are strategically positioned and often protrude up from dead flat ground to confuse depth perception and obscure the green sites. The links landscape itself is quite stark here but the number of high quality holes constructed on featureless ground is remarkable. The likes of 7, 9, 10 and 12 are unlikely to stimulate the senses but have stern driving challenges and well-bunkered greens that force those seeking out pins to take substantial gambles.

All eighteen holes are capable of hurting the unsuspecting golfer, and after an attractive but relatively soft opener, the first real test is the terrific 2nd played through a narrow valley and into a long, tiered green pinched in by greenside bunkers. The pitch across Jockie’s Burn into the heavily contoured 3rd green is another gem, as is Hogan’s Alley (6), a brilliantly conceived three-shotter along an out of bounds fence with central bunkers splitting the fairway and squeezing the aggressive driving line. For a relatively flat five this hole is almost perfect, with each shot becoming progressively more difficult the more conservative one has played and each bold decision carrying a significant risk but genuine reward. The 7th is then the archetypal Carnoustie hole, a well-bunkered but bleak par four that forces those looking for birdie to either drive close to the boundary fence or a couple of hungry bunkers according to the pin.

As for the rest of the course, both the 8th and 13th are outstanding short holes with great green sites while the 14th is the most intimidating from the tee and the start of Carnoustie’s famous finish that includes one of golfs hardest par threes (16) and three of its strongest fours (15, 17 and 18). The final two holes both use the naturally snaking Barry Burn to tremendous effect. Splitting their fairways several times, the burn creates strategic golf holes which are relatively simple to bogey, but can prove quite an ordeal for those searching for better.

Forget what you may have read about Carnoustie, for although it is tough it is far from the unplayable monster that many make it out to be, especially when the rough areas are robust rather than ridiculous. The course is a great challenge and an absolute pleasure to play. Though it lacks the obvious sex appeal of a Royal Dornoch or a Turnberry, Carnoustie has as many outstanding holes as either and remains one of Scotland’s must-see layouts. 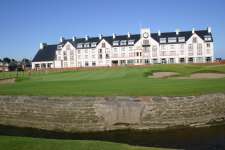 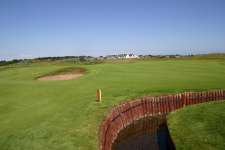 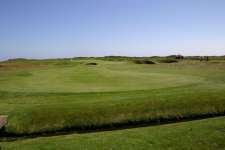 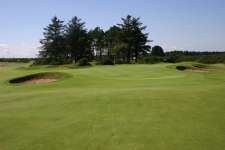 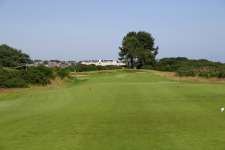 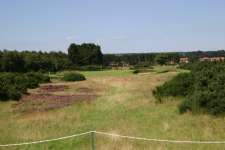