‘Never was a links more adapted by nature for a golf course than that fine stretch of ground lying round the Bay of Cruden’ Golf Magazine, 1899

Occupying some of the mightiest duneland in Scotland, Cruden Bay is a cult classic situated along the Bay of Cruden twenty miles north of Aberdeen. Golf was first played in this small village as far back as 1791, although the present links were created by Old Tom Morris in 1899 for the Great North of Scotland Railway company to compliment their newly completed Cruden Bay Hotel. Erected on cliffs overlooking the sea, this grand hotel was reminiscent in scale and splendor of the famous Turnberry hotel but was sadly demolished after falling into a state of disrepair during the Great Depression. Fortunately the links was saved a similar fate by a group of local businessman who purchased the site and established the Cruden Bay Golf Club.

Set amidst glorious coastal dunes and along the white sandy beaches of the curving bay, the links of today differs considerably from the 1899 version with Tom Simpson redesigning the layout in 1926 and responsible for its current configuration. Simpson was generally critical of Morris’ design work, but at Cruden Bay he found much to admire and kept the basic routing and several green sites, including the 6th which he believed was one of the finest in Britain. Despite almost one thousand yards being added since the 1920’s, Cruden Bay remains very much as Simpson and Morris had conceived.

The Ancient ruins of Slains Castle, the inspiration for Bram Stoker’s Dracula, provides a striking backdrop to early holes that head east toward the historic fishing village of Port Erroll. The first standout hole is Simpson’s drivable par four 3rd, with its sunken green hidden from the tee and pushed into a hollow immediately above the village’s tidal river. The long par three 4th then heads along the river and toward the sea and is another mighty Simpson hole of considerable quality. From here the course turns to follow the shoreline and onto the strongest stretch of golf on the links. Both the 5th and 7th are fine two-shotters through big dunes, while the 6th is one of the sportiest par fives in Scotland, where attempting to hit the green in two requires the boldest of strokes across wild rough areas to a narrow tiered shelf of green set beyond a burn.

The character of the links changes briefly at the 8th as you head through a large grassy amphitheatre and onto the hilltop 9th hole, with its stunning views across the site and out over the ocean. From an elevated tee, the 10th then crashes back onto the lower linksland where both Simpson’s short 11th and the par four 17th are among the notable remaining holes. The tee shot on the 17th is dominated by a large central mound, said to be an ancient burial ground for some of the ten thousand soldiers slain on the site during a bloody 1012 battle between the Scots and Danes. The real talking point, however, is the bizarre stretch from 14 to 16 which features back-to-back blind greens and consecutive par threes. Played into a narrow valley between the beach and huge dunes, the 14th is a terrific hole that rises into a dell green located in a hidden hollow. Next up are the two par threes, the first a brutal long shot across the corner of a large hill and the second, a shorter hole, typically played into the headwinds to an obscured target that slopes away from play.

Largely unheralded for many decades, Cruden Bay was recently ‘discovered’ by several prominent writers and golf professionals and its popularity has since exploded. While there is much to admire about this unusual links, in some ways the course suffers from its own success as it seems to sit more comfortably within the hidden gem category than as a standalone, must-play destination like Royal Dornoch, St Andrews or the nearby Royal Aberdeen. There are some very odd moments here, a bland start, an out of context central section and successive blind par threes that many are bound to dislike. There is also some exceptional and unconventional golf, however, which combined with the charming, laid-back ambience of the small village and its wonderful duneland make Cruden Bay a hugely enjoyable experience. 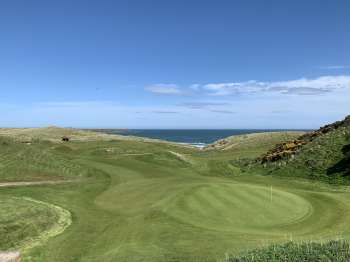 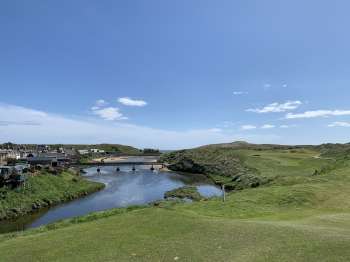 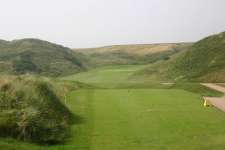 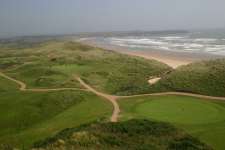 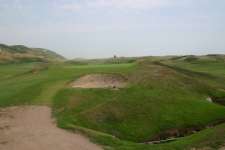 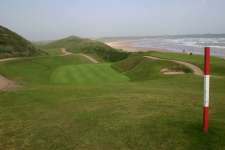