When Dr. Alister MacKenzie first saw the original course from the Hill o'Doune he recognised the potential.  He wrote to the Club in July 1923. His letter concluded: "I have rarely come across a piece of golfing ground which lends itself so well to the construction of an attractive course..."

His words chimed with the then ambitious Committee.  He would be the architect of change, his brother Major C.A. MacKenzie, the constructor.  All 18 greens were redesigned and remain testament to his talent.  The new course was ready for play late in 1924.

MacKenzie was not done yet.  He maintained that the ideal course should include:
- Undulating greens and fairways without steep hills
- Few blind shots
- Emphasis on natural beauty, not artificial features
- Always an alternative route for the weaker player
- Yet sufficient test for the low handicap golfer
- Course condition must remain consistently outstanding

We ask you to judge for yourselves if the Club has matched the great man's expectations when you play the course's 6,043 undulating yards!   We know you won't be disappointed...

The 6th Earl of Fife, Alexander, was the Founder and Patron of the Golf Club.  Aged 40, he astonished his close friend, Edward, Prince of Wales, by seeking to marry his eldest daughter, Louise, who was then just 22.  Queen Victoria was delighted and the Earl was granted a Dukedom as befitted his marriage to a Royal Princess.  He was given a choice of titles but settled for the ancestral Fife.  The marriage took place at Buckingham Palace in 1889.

Their enthusiasm for the Royal and Ancient game was boundless.  They even employed a professional for the maintenance of the few holes which surrounded Duff House.

They gifted the house and 140 acres to the communities of Banff and Macduff in 1906 which in turn led to the development of the course and the ultimate ownership of the land by Duff House Royal Golf Club.

In December 1923 HRH The Princess Louise expressed a wish to become Patroness of the Club and desired that the Club become Duff House Royal Golf Club.  A year later Dr. MacKenzie worked his magic! 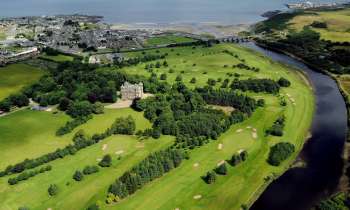