If the game of golf was played in the Kingdom of Fife in the late 15th century, it could not have been many years later before it was introduced to the Highlands. However, the first documentary evidence of golf being played over Chanonry (now Fortrose) was not until 1702. A reference in the 1793 Statistical Account of Rosemarkie, confirmed that the game had been introduced many years earlier and had become an established sporting activity of the area. Evidence is now in place making Fortrose & Rosemarkie Golf Links the 15th Oldest Recorded Club in the World with golf being played along the current 6th, 7th and 8th holes up further up towards the town of Fortrose in 1793 alongside the current caravan site. An AGM was also arranged for the month of July 1793 in Williamson's Tavern!

By the latter half of the 19th Century, Fortrose and Rosemarkie had emerged as a favourite place of summer retirement for men of industry and commerce. In around 1876, the Kennedy family came to live in Fortrose. It was not long before Mr Kennedy, already a member of 5 golf clubs, had cut and clipped 2 holes in the links, one close to where the clubhouse now stands and one by the Witches Stone on the 17th fairway. Officer friends of Mr Kennedy would also be invited from Fort George (by rowing across) to play on the course with locals. Before that, others had only knocked a ball haphazardly over rough terrain, in more of a point-to-point rather than tee to green nature. If it was the Kennedys who promoted the idea of a golf club, it was another group of learned and influential men who brought it about and they met to consider the formation of a golf club on 9 September 1888 and by the end of that year the membership stood at around 50 members. At this time the motor car was yet but a dream of the inventor and the highland railway was still a decade away from penetrating the hinterland known as the Black Isle. The first clubhouse was later built and opened in 1895. Prior to 1895, arrangements were made for members to leave their clubs in the care of the governor of the nearby Black Isle poor house. There was also the problem of carts being driven by horses over the course to collect sand and shingle from the shore or to carry ice to the fishing station at the Chanonry point. The town council eventually sorted out this problem by laying out designated routes to prevent the course from being damaged further.

The First World War led to a reduction in numbers and competitions were suspended and club activity virtually ceased until 1919 by which time considerable damage had been done to the clubhouse by men of the Highland Cyclist Battalion who had used the premises as a guardhouse.

Peacetime brought a revival of interest but it was not until 1922 before the course was restored to a sufficient standard to allow the resumption of competitions. By 1924 the course had been extended to 18 holes and in 1934 a new clubhouse could be afforded. In 1932, James Braid (5-Time Open Champion) was invited to advise on a new course layout. With further land being acquired at Chanonry Point this was an opportunity to extend the course. On Saturday, 8th June 1935 a newspaper report noted that ‘The new 18 hole golf course, laid out by Mr James Braid, is of great variety and necessitates much skill. It’s sporting character will, no doubt, attract many visitors to the district’. Over the following two years as more land became available to lengthen some holes, Mr James Braid was invited back to make a fresh survey. His fee was £12.10/-. Under Mr Braid’s recommendations, the course was re-designed and a course was laid out forming the basis of the one in use today.

Course architect James Braid's remarkable achievement in designing 18 challenging holes within the narrow Chanonry peninsula is instantly obvious and admired by first-time visitors. Modern-day golf writers enthuse over the course layout and condition, with accolades such as 'a gem of a course by the sea' - 'the smallest but perhaps the brightest jewel in the Highlands' golfing crown' - 'one of the most pleasant rounds of golf in the north' - 'a unique course with a special character to be found nowhere else'.

The 6085 yards at Fortrose and Rosemarkie Golf Club is more than offset by its small, deceptive greens and strategically-placed bunkers - challenges which are multiplied in the mind of the player by a public road dissecting the course, the proximity of the sea to eight of the holes and the dense island of gorse that awaits the wayward shot at numerous others.

Playing to one's handicap, therefore, is never easy, especially on a windy day. Par is 71 but the standard scratch score is 69 (70 from the Black Tees).

By the card, Lighthouse, the 4th hole, might appear not to merit a par 5 rating, the hole being only 455 yards from the medal tee, but the degree of difficulty quickly becomes obvious to the player and is reflected with Stroke Index 1. The hole is widely regarded as one of the most challenging in the north. Icehouse, the 5th hole, may be a mere 132 yards, but depending on the wind direction and strength, it can be anything from a flick with a wedge to a full-blooded 3-iron from even the long hitters. 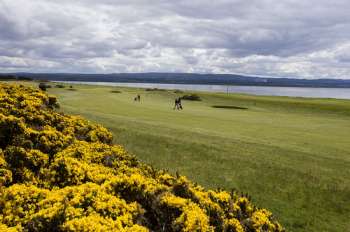