Nestled at the foot of the Highlands and surrounded by some of the prettiest countryside in all of Scotland, Gleneagles is a luxury hotel and golf resort situated on the windswept moorlands of Perthshire. It was built by the Caledonian Railway Company during the 1910’s and was most likely inspired by the success of other rail and resort destinations such as Turnberry and Cruden Bay. James Braid designed the first two courses on the vast estate, both his Queens and Kings layouts opening in 1919 with the magnificent chateau style hotel completed five years later.

The Kings Course was created out of a dramatic wilderness cleared mostly by horse and cart, its holes built over an undulating sandy heath and the springy fairways lined with punishing gorse areas, heather patches and frequent copse of pine and birch. Most of the golf falls naturally across ridges and deep glades or through small-secluded valleys and attractive glens. With sweeping views of mountains to the north and rolling green hills to the south, the scenery throughout the journey is as rich and impressive as the resort’s luxurious lodgings.

The starting stretch is particularly solid and although the opening hole seems an unlikely design highlight, its fairway is so wide and the steeply elevated green so clearly the major obstacle, that sleepy golfers are often lulled into a sloppy approach with dire consequences. Snaking its way downhill, the 2nd is then an excellent driving hole while the Silver Tassie 3rd heads back up into a hidden fairway and an outrageously hidden green site. The round doesn’t get any easier from here but thankfully the highlights continue. The short 5th, with its cruel tabletop target, and the doglegging 7th across a blind rise are the standout moments on a front nine that ends with a gorgeous one-off hole heading toward the distant hills. The inward run then heads out to the farthest point on the property before turning and snaking back toward the imperious hotel. Aside from being a nine of great balance with a variety of hole lengths and challenges, the real star of the back nine is Braid’s beloved 13th, a wild ride across tumbling ridges and through gorse, bracken and deep, devious bunkers into its superbly tilted green site.

Beyond great golf, Gleneagles can also provide design enthusiasts with a valuable insight into the shift in design philosophies through the decades. The newer Jack Nicklaus designed Centenary Course may be a Ryder Cup venue and occupy an attractive piece of ground, but it is indistinguishable from many of his other projects and disappointing when compared to the mighty Kings and its under-appreciated little sister. Shots into the 9th, 12th and 17th on the Queens Course, for instance, are among the most enjoyable on the entire property.

Thankfully there is also much to admire about the tremendously original and consistent Kings layout, especially its best few holes which are absolutely outstanding. Though Woodhall Spa and Ganton are both more difficult and Sunningdale, Swinley Forest and Loch Lomond more exclusive, Gleneagles Kings is the equal of them all and unquestionably one of the premier inland courses in Britain. 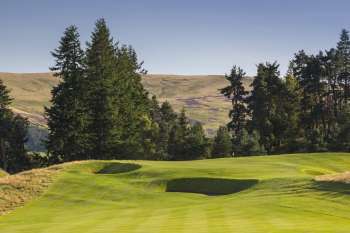