‘From my first visit to the site I could see the potential for a great course.’ Kyle Phillips

Opening in 2000 to unprecedented levels of international acclaim, Kingsbarns is a remarkable links achievement that stretches along one and a half miles of Fife coastline just outside St. Andrews. Covered in a sublime dunescape and with outlooks across the North Sea from every hole, the site appears ideal for golf, yet the virgin land here was devoid of any natural feature, clay based and mostly unsuitable for the game.

Golf on this particular property actually dates back as far as the 1790s when the Kingsbarns Golfing Society was formed, though the land had been used as agricultural ground ever since the Second World War. When American designer Kyle Phillips first saw the property during the 1990s he immediately recognized its potential, and dreamed of converting the flat site into a big dune links complete with high hills, rolling fairways and constant sea views. His concept was sold to Californian developer Mark Parsinen, who helped finance a project that required a considerable amount of earthmoving to complete.

The key to making the Phillips vision effective was building a realistic dune system. Drawing upon previous experiences in the field and extensive terrain analysis, he first created an immense artificial landscape and then spent weeks roughing up the hills to make them look natural. The result is some of the most authentic looking dunes constructed for golf, with a series of attractive parallel ridges built along the thin strip of coastal land. The fairways are mostly cut into staggered sand shelves to ensure panoramic and uninterrupted views of the water. Complimenting the gorgeous playing corridors are highly contoured target areas that are generally angled to offer the bold driver a range of approach shot options.

Kingsbarns begins with a terrific starting par four that tumbles toward the sea and immediately introduces golfers to the views and the layout’s classic links characteristics. The remaining holes are arranged in a couple of rough figure eights, and largely follow the shape of the coastline. The best stretch of golf comes through the middle of the round, with the short par four 6th a particular favorite. Its green is simple and open for golfers able to drive onto the narrow right shelf, but blind and more difficult for those bailing down the safer left side. Also excellent are short holes at the 2nd, 8th and 13th and the dramatic par five 12th, which sweeps around the shoreline. The closing stretch, from the beachside par three 15th, is equally memorable and ends with a very strong par four that demands a bold approach across a burn into a steeply tilted green.

Sensibly, while the golf course can be set up to test elite players it is not overly demanding from the regular tees for the average green fee golfer. It’s also fun and interesting for both amateurs and professionals to play, given the constant views and mix of firm fescue surfaces, ever-present winds and subtle directional shifts.

Kingsbarns was a massive opportunity for Kyle Phillips and came shortly after he left Robert Trent Jones Jr. to start his own design business. Although he did an exceptional job, in many ways the links is as much a triumph of vision and construction as design, with the experience more about the authenticity of its appearance than a large number of wow moments. There is no denying that Kingsbarns is scenic, challenging, well built and kept in super condition. Were there just a couple more outstanding golf holes, however, it would unquestionably rank among Scotland’s finest few. 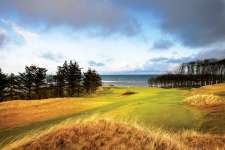 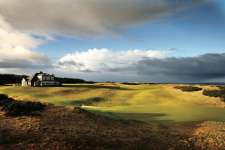 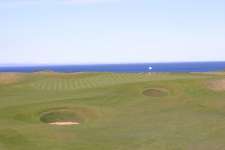 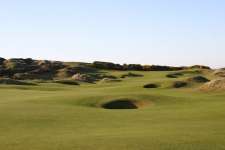 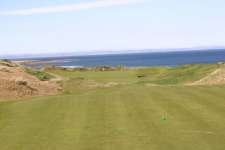 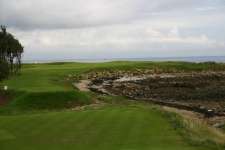