Set along the bonnie banks of the magnificent Loch Lomond and enjoying startling vistas across its glassy waters to the surrounding Ben Lomond Mountain, the Loch Lomond Golf Club is one of the most sumptuous golfing experiences in all of Europe. Built on land that is sacred to the Scots, it took ten years to convince authorities to grant the necessary permission to build a golf course on the site. When finally approved, the original investor offered the design job to former Open champion Tom Weiskopf after being frustrated that other ‘signature’ designers had indicated they would only send associates to the site to do the work. Being a very ‘hands on’ designer, Weiskopf, by contrast, was able to devote the time necessary for a project of such significance.

When Weiskopf arrived in Scotland there hadn’t been a course built for almost twenty years and to his great surprise, aside from resting beside one of the most beautiful Lochs in the country, his property was blessed with a collection of huge old trees, natural wetlands, marshes, trout streams and enough elevation change to create interesting holes. Unlike many designers he, and partner Jay Morrish, spent an inordinate amount of time onsite recognizing the rare opportunity they had been given to create something quite remarkable and pouring their energies into the course. Weiskopf even relocated his family to the area for two summers while he worked on shaping its every feature.

With a distracting setting and a course maintained in mint condition, the quality of the design on the ground is at times overlooked here. While its overtly American character upsets some, the site did not lend itself to links style golf as parts lie below the level of the lake and the soil is heavy and damp. The variety of holes and shotmaking challenges is impressive, however, and the actual design elements employed are first rate, particularly the interesting use of hazards like the low stone wall that crosses the 3rd green, clever central traps at the 6th, 7th and 9th and the burns and lakes dotted strategically through the back nine.

Arranged in two loops, the first eight holes run through pine forests and along the banks of the Loch and the final ten, cut by several burns and streams, end alongside a small cove. Front nine highlights include the par three 5th, which heads toward the Loch, and the two subsequent long holes that follow its shoreline. Turning away from the water, the short par four 9th is an interesting hole on flat land while the 10th is a downhill two-shotter along a pond that provides a demanding start to an inward half full of outstanding moments. These include the fallaway green on the 12th and the intriguing par five 13th, with a creek set well back from the green and either flown in two or three depending on the strength and accuracy of the drive. The 14th is then an excellent short par four that is reachable for the long hitters who can carry wetlands and chase the ball onto the green via a narrow frontal apron. The finishing stretch is particularly difficult and starts with an impossibly long sidehill par four at the 16th followed by a stunning long shot over wetlands to an attractively bunkered green at the 17th. Concluding the round is a wonderful Cape style hole around the Loch to a fairway leaning toward the water. Its three-tiered green is set up to favor those driving bravely down the left side and rests beneath the ruins of the 15th century Rossdhu Castle.

Though unashamedly American, the design at Loch Lomond has more substance than is sometimes apparent. Tom Weiskopf was so passionate about his work on this extraordinary property that he worked himself into the ground, very nearly dying early one morning when he sank in a quicksand bog up to his chin beside the 13th hole. Had he not been six foot-three he may never have seen the completion of a course which is one of the most impressive modern creations in the British Isles, and clearly the best of any built away from the sea. 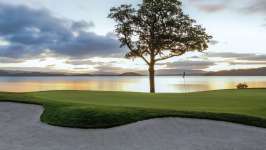 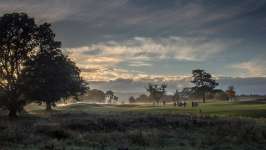