Situated at the southern tip of Scotland’s romantic Kintyre Peninsula, the Machrihanish Golf Club is one of the most remote courses in golf and started life in 1876 on a ten-hole links laid out on farming ground adjacent to the Atlantic Ocean. The club soon flourished, and in 1879 Old Tom Morris arrived from St Andrews to extend the links out to eighteen holes. The course was then re-designed by J.H. Taylor in 1914 and again thirty years later by Sir Guy Campbell, though the efforts of each man is barely visible upon what is one of the game’s most natural landforms.

Machrihanish is an old-fashioned links with a very traditional out and back layout that first follows the humps and hollows of the sand dunes bordering the Atlantic and then heads home inland toward the Kintyre hills. The most significant features of the links are the incredibly natural greens, which are among the coolest target areas on the planet. Many are merely a conclusion of its rollicking fairways with some set down in bowls and others atop steep ridges or built through fairway valleys. The memorable greens are almost too numerous to mention but there is little to compare with the pleasure of pitching or putting into targets like the hidden 2nd, set beyond a hill in a fractured punchbowl, or the away sloping 13th green with its massive false front.

The round begins with a cracking hole, regularly rated the best opener in golf. Built by Morris this bruising par four is played across the corner of Machrihanish Bay, and often into the wind, to a fairway set diagonally across the tee. The course itself is much more than a one-hole wonder, in fact the entire front nine are exceptional with wild moments like the approach into the sunken 3rd green, the terrifying short par three 4th and the partly obscured 7th hole, just as impressive as that intimidating opening drive. The 6th is a great short par four as is the 8th with its frightening target sitting atop a flattened hill. Most outstanding of all, however, is the 5th with a fairway that narrows as it turns hard-left into a remarkably undulating green site that falls away from play. The longer one drives on this mid-length par four the more palatable the approach, as those coming from too far back have to cross a sharp left-to-right slope.

Like a number of other renowned out and back links, the inland holes here are inferior, though aside from a couple of flat holes at the finish the remainder is full of real quality. The par five 10th and small tabletop par three 15th, for instance, are very fine while both the 12th and 13th are moderate holes worth seeing for their incredible green complexes. The 12th is a three-shot hole on relatively dull ground that ends with a bumpy basin-shaped green which is raised above deep bunkers, set beyond a slight dip and slopes noticeably from front-to-back. The second of consecutive par threes, the long 16th is another excellent test, though somewhat disappointingly a dune ridge was shaved down in the 1990’s to allow a view of its previously hidden target. From here the journey back to the clubhouse takes you across two flat fairways, with avoiding a burn on the 17th and an out of bounds area on the 18th the key to finishing your round well.

There is no doubt that part of Machrihanish’s attraction lies in the remoteness of its setting and the escapism that playing here provides, but to dismiss the golf as simply remote is to overlook a front nine of real quality and the most imaginative set of greens to be found anywhere. Indeed there are few more enjoyable places to golf than Machrihanish, especially on those rare mornings where the sun is shining, the wind is blowing and the ball is still flying straight. 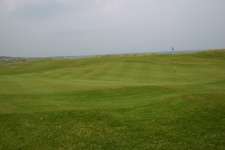 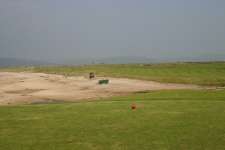