Prestwick St Nicholas Golf Club is the 26th oldest Golf Club in the world.  Old Tom Morris winner of four Open Championships was a founding/honorary member of the club, a traditional Scottish links golf course occupying a prime position on the shores of the Firth of Clyde.

St Nicholas Golf Club originally played on the 12 holes which comprised Prestwick Golf Club. In 1877 the Club moved to a different site in Prestwick but the ground was only leased on a short term basis and the Committee took action to ensure they got ground they would ultimately call their own. In 1892 the Club moved to its present site and 18 holes were laid out by the Club’s first professional, John Allan, and Charlie Hunter who had succeeded Tom Morris as professional at Prestwick Golf Club.

The course is a traditional Scottish links possessing as it does a sandy, free draining soil, gorse, deep bunkers and a seemingly ever present wind which tests the skills of players of all abilities. The sandy soil allows golf to be played here all year round as the heaviest rain drains away very speedily.

The course lies between the Ayr to Glasgow railway line and the Firth of Clyde – the presence of the latter has resulted in golfers being able to admire the truly stunning scenery of the Ayrshire coast. To the south one sees the spires of the town of Ayr, the “Heads of Ayr” and Ailsa Craig whilst in the West lies the magnificent sight of the island of Arran.

It would be fair to say that thanks to the hazards provided by nature, strategically placed bunkers and the fact that “Out of Bounds” is a feature on at least 12 holes, this course is one which can favour the thinking golfer rather than the long, wild hitter.

There are two unusual features encountered on the golf course. Firstly there are the “Salt Pan” buildings behind the 1st green. These buildings were constructed in approximately 1790 and were the latest in a series of workings going back to the 15th century designed to extract salt from the boiling of sea water.

The second unusual feature is the flooded quarry which lies between the 7th and 8th holes. This quarry supplied stone for many of the houses in the area but extraction ceased in 1870. Despite the fact the quarry is only 50 metres from the sea, the water is fresh and is used by the course’s irrigation system.

The water filled quarry gives the course a natural water feature of considerable proportions and has the added benefit of providing a home to many wild birds – you will frequently see swans, ducks, oyster catchers, herons and grebe. 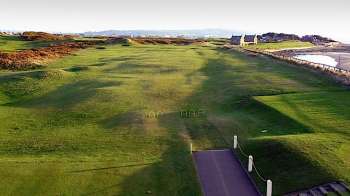 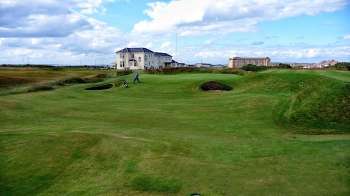