The Royal Troon Golf Club was formed in 1878 on a five-hole links created by the head greenkeeper at the neighboring Prestwick Golf Club. This initial layout was extended to eighteen holes within a few years by club professional George Strath and then altered by his successor, Willie Fernie, and again by James Braid prior to the 1923 Open Championship. Though little structural change has taken place since, as a regular championship venue its holes have been stretched considerably through the years, to the point where today’s links is among the longest, and certainly the most difficult, in the British Isles.

In many ways Troon is the archetypal Scottish links and an ideal Open venue, its classic routing running out and back along bouncy low-set links terrain and dominated by deep rough areas and punishing revetted pot bunkers. While its landscape is a little bleak by comparison to others along the Ayrshire Coast, the links does feature pockets of quirkiness and the occasional exciting blind element, especially through a memorable cross-country central section.

Very much a tale of two parts, the round starts with a series of gentle holes running out along the sea and typically played with a helping wind, before turning inland and then onto a furious back nine which is much longer, has a lower par and plays into the stiff winds. The best stretch of golf comes through the middle of the round, which links the tamer start to the tougher close and enjoys the only significant elevation change on the property. The first to turn inland is the 7th, a medium length par four of considerable intrigue with a fine green site and endless options of attack. The next is the highlight, Troon’s world famous Postage Stamp hole, which plays little more than 120 yards but features one of the greatest target areas in golf. Its tiny green is cut into the side of a sandhill and falls sharply away to deep sheer-faced bunkers. With the penalties for any miss severe, the only way to avoid catastrophe here is to find the putting surface from the tee.

For those struggling to come down from the euphoria of the Postage Stamp, the 9th is a dangerous little sleeper and from here things only get more difficult as you turn for home and face the headwinds for the first time. The back nine challenge starts immediately with a blind drive over a gorse covered hill and a perilous approach into a plateau green followed by an even fiercer test on the 11th, with its hidden fairway nestled between a railway line and thick gorse. The remaining stretch provides little respite, the sole hole running back downwind, the 12th, is a tricky par four with a tiered green, while the short 14th and 17th are both very fine, testing shots into tight targets. The 18th is then a classic finishing hole played through sand and fescues toward a green set beneath the clubhouse.

Royal Troon is a good links but a great tournament venue, it may not be the most exhilarating place to golf but there is a nice flow to the routing and the final nine is certainly proficient at separating the pretenders from the contenders. Plus in the Postage Stamp, Troon boasts one of those rare holes that alone are worth traveling long distances to experience. 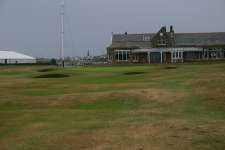 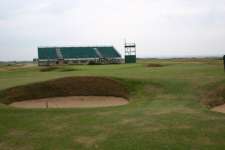 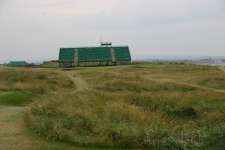 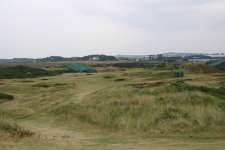