The Carrick at Loch Lomond

Built by, and named after, Canadian golf course architect Doug Carrick, the Carrick at Loch Lomond is a modern resort course developed by the De Vere Hotel group and set partly on the banks of Scotland’s sublime Loch Lomond.

This was an extraordinary project for Carrick, who was not only given a generous parcel of land for his course but little residential interference as well. The property has some difficulties, namely that parts are quite low and wet while in other areas the golf has to climb above the loch and into the upland areas. These issues aside, there are scenic views of the nearby hills throughout the front nine and late in the round the golf briefly touches the banks of the water. Sadly, however, the golf course fails to reach any great heights and Carrick’s design work is a little uninspired. A number of the longer holes are hopelessly over-bunkered, while there seems to be nothing new or original on the four shorter holes, which in part had some potential.

In terms of the routing, the opening nine is mostly an out and back loop while the back nine treks higher into the site before dropping down beside the loch. Better front nine holes include the par four 4th, which turns left alongside a nice natural pond and the stronger 7th with its striking Ben Lomond backdrop. On the back nine the elevation changes provide some interesting golf, and aside from the awkward drop-kick par three 14th has been worked well into the course. The par five 15th, down along the water, is a reasonably nice hole and probably the standout on the back side.

Unfortunately for The Carrick at Loch Lomond, the layout is situated close to the private and more celebrated Loch Lomond Golf Club, and in many ways is cursed by comparison. Many visitors to Scotland struggle with parkland golf at the best of times, and those who have seen the nearby Weiskopf Morrish course are unlikely to be overly impressed by Carrick’s work next door. 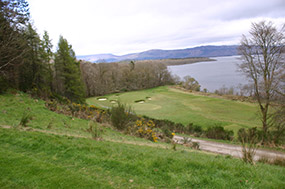 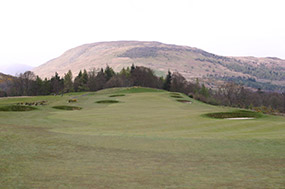