‘The best ground for a golf course that I have ever had the pleasure of viewing.’ Willie Campbell, 1891

The Machrie Golf Links on the island of Islay was first designed by Willie Campbell in 1891, and is one of the most remote, and more romantic, golfing locales in all of Scotland. The island itself is part of the Inner Hebrides, and lies to the west of the Kintryre Peninsula. It is famous for its faming and malt whiskies, with the eight active Islay distilleries a major employer of local workers and responsible for producing some of the finest whisky in the world.

Situated adjacent to the island’s airport, the golf course occupies a tumbling stretch of dunes that overlook the beautiful Laggan Bay. It was here in the 1890s that Campbell met with club founders, and told them they had some of the best links land imaginable for their course. These founders were mostly farmers, and the ground they had given to Campbell included an area that was leased from a neighbor. This agreement would later play a central role in the changing of the Machrie in the 1970s, as an ancestral dispute over usage of the land forced the golf operators to re-route the original layout away from the leased farming area.

Despite being surrounded by quirky, fun golf links, The Machrie still manages to stand out in Scotland as one of a kind. Even with the loss of several Campbell holes, it has more blindness than at other links we know and a really unconventional routing that attacks the undulations and dunes in all manner and form. The most unusual aspect of the Machrie is that there are far more blind approach shots than blind drives, which is really unusual even in Scotland. There is no doubt that the biggest criticism aimed at these links is that there is too much by way of blindness. In its defence, the blind shots at Machrie are not only great fun to play they are completely in context with the nature of the terrain as well as the nature of the shot required. From the tee you generally hit across a clearly marked dune to a generous landing area, while approach shots are mostly played into greens that rest immediately beyond a protruding land feature. For ‘feel’ players it is not difficult to visualize the shots required, and is immensely satisfying when they are played successfully.

Interestingly, 11 of the 13 surviving Campbell holes are blind in one shape or form, while none of the holes Donald Steel added in the late 1970s leave the golfer unsighted in any way. Steel’s holes are 10-14 on the current routing, and are apparent for the lack eccentricity found on the originals. His green complex on the 13th is in an outstanding location, and the par three 12th, though a shade too penal for such a location, is a nice attempt at recreating one of the Campbell’s lost green sites. Unfortunately, the rest are not of the same quality as the remainder of the layout, particularly the rather dreary par three 10th and the short par four 11th, with its unwelcome internal OOB.

Thankfully the original holes here make up for any disappointment with the new ones, as they are full of originality and charm as well as genuine design quality as well. The best on the front nine include the par four 3rd, with its sunken half-pipe green, the twice blind par four 7th and 8th holes and the remarkably heaving mid-length 6th, which is similarly twice blind unless golfers can drive bravely down the right hand side and either attack the green from atop the fairway ridge or down on the secondary tier. The best, though, is perhaps the sideways 9th, which features a mere sliver of fairway benched into a pronounced embankment. The genius of this hole is that the partially obscured green is subtly cupped to favor those able to slide their drive along the fairway plateau.

Of the closing holes, the standouts without question are the narrow Alps-style 17th, and the rollicking par four 15th, which turns left but dares golfers to sneak a drive up the right in order to open up the best view, and the best angle, into the attractive green site. Steel’s par five 13th is another high quality hole, although its beautiful amphitheatre green would be greatly enhanced by a re-think on the associated bunkering.

It should be noted, that beyond a fine array of fun, charming golf holes, the Machrie is also blessed with some of the purist links surfaces in all of Britain. Given its modest green keeping budget, the quality of the turf here is a testament to the skill and passion of the small crew who look after the links. For much of 2011 the course was actually maintained by just one man, head superintendent Simon Freeman, who was left alone when the previous owners went into receivership. Thankfully the course was purchased later that same year by a passionate devotee of these ancient links, who immediately invested in his maintenance team. The new owners have also drawn up plans to rebuild the hotel and villas, and eventually to change some of the Donald Steel holes to better tie them in with the rest of the layout. Plans include a potentially brilliant par three 10th played toward the beach, and a greatly improved 11th back across the existing 10th green and down the current 11th, which would eliminate the need for an internal out of bounds.

Regardless of when future improvements might be made, the opportunity to visit the Machrie at any time and play on some of the most unconventional golf holes in existence is a rare treat. Those who dislike blind shots and fear this course is not for them need remember that golf is a game, it’s supposed to be fun and spontaneous and all golf courses should follow the lie of the land as much as possible. There are few more beautiful sites in golf than The Machrie, and few, if any, golf courses that are as natural and as original.

If this web site only inspires you to seek out one of golf’s true hidden gems, let it be The Machrie. 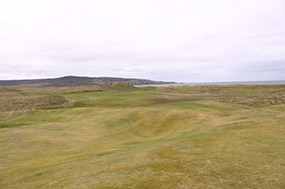 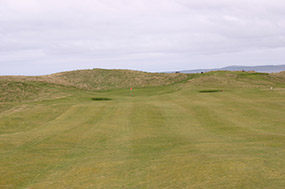 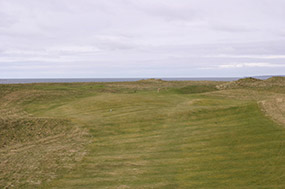 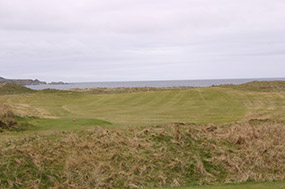