Developed by high-profile American businessman Donald Trump, Trump International Golf Links, Scotland is only a few years old but already one of the most polarizing courses in the world. It was designed by softly spoken Englishman Martin Hawtree, on a stretch of duneland north of Aberdeen known as the Menie Estate.

This part of Scotland is renowned for its great links, and Trump’s course is undoubtedly the most dramatic in the region. It has a strong Irish feel, with towering sand hills across the property and holes set mostly through deep dune valleys, rather than directly against the coastline.

While the property is certainly beautiful, one could easily debate the golfing merit of some of the taller sand structures here as well as the largely north-south orientation of the usable valleys. The only hole to shift noticeably from these north-south corridors, and head across the prevailing winds, is the par three 13th, a gorgeous hole played toward the sea and a host of tepee-shaped sand dunes.

Hawtree clearly had a brief to create a spectacular golf course and on a superficial level, at least, he succeeded. Sticking all of the golf into the heaviest dunes ensured that virtually every hole made a big visual statement. It also left the course extremely difficult. The main issue with playability is the mix of narrow fairways with the often-penal native roughs, particularly cruel given the frequent high winds. Finding fairways is made harder by the fact that many of the tees are elevated atop the bordering dunes. These higher tees offer some of the best views at Menie but make the course longer and more taxing to walk. Busy days with a high wind here can be brutal.

None of this will concern the owner of the golf course, or the largely foreign clientele for whom being stuck on a demanding links for five or six hours is anything but a chore. Working in its favor is the fact that the dunes are mostly superb, the views often beautiful and the grooming a step up from some of the neighboring links.

There are also a number of decent golf holes on the Trump Scotland layout, particularly the par threes. Besides the longer 13th, the short 6th is the standout photogenic one-shotter and notable for a green tucked into a heavy dune clearing. Sliced balls here tumble down an embankment, toward a burn and off into oblivion. The green site on the long 10th hole and twisting par fours at the 11th and 12th are also worthy of mention. As is the intimidating par four 14th, played within earshot of the North Sea to a narrow fairway between large, converging sand ridges. The view from this elevated tee is arguably the best on the course.

While there is obvious quality at Trump Scotland and literally dozens of gorgeous vantage points, the big issue purists will have with this layout is the sheer difficulty and number of awkward architectural features. The small revetted bunkers, for example, are well built and formidable as hazards, but often placed in formations that lack elegance or genuine strategic merit, particularly on the par fives. The split fairway 10th is also curious for an alternate fairway that affords golfers the option of turning an essentially straightaway par five into a longer, sharply turning dogleg.

More worrying for some will be the lack of variety with the greens contouring and the absence of genuine design subtlety. All the great Scottish links have a tempting driveable hole but the only reachable par four here is the 7th, which features such a severely pushed-up green that the only sensible way of playing it is to lay-up and approach with a wedge. Without doubt this undue focus on protecting par is what holds this course back the most, and keeps it from the absolute top shelf in Scotland. There are also too many greens surrounded by abrupt chipping hollows, recovery options repeatedly limited to either a lob wedge or a putter, rather than a testing bump and run shot.

As modern courses in Great Britain go, however, Trump International Scotland is quite good and particularly worthwhile for those who like their links golf long and hard. Whether there are enough golfers up for the challenge to sustain the development, and keep the cash registers ticking over, only time will tell. Time will also tell whether those visiting the already outstanding Aberdeenshire coast choose repeat rounds at Trump International or at neighboring links like Royal Aberdeen, Cruden Bay and Murcar. Each is very different, and part of a region that surely rivals Ayrshire and East Lothian as the next best option in Scotland behind the Kingdom of Fife. 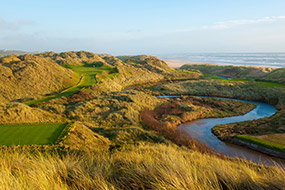 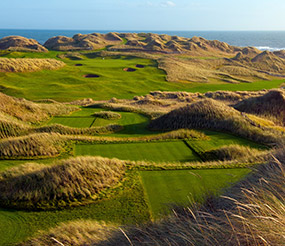