During 1893 a group of like-minded men from Glenluce and Stranraer discussed the possibility of finding a suitable piece of land and starting a golf club.

By the first week of March 1894, the 65 acres of land known as Mains of Park (present holes 1-4 & 14-18), had been leased and the services of Mr Charles Hunter professional at Prestwick had been engaged to design 9 holes of ‘sporting character’.

The Course was officially opened four weeks later, at noon on the 28th March 1894, by Sir Herbet Maxwell Bart. MP.

The 9 hole course was purchased from the Department of Agricultural for Scotland in 1966 for £2,000.

The Course lies on the shores of the scenic Luce Bay. On a clear day, looking South over Luce Bay, the Isle of Man can be seen. The course is slightly over 6000 yards and is a test for both high and low handicap players, due to the differing directions of the sea breezes.

The Course is also playable, on normal greens, throughout the winter. On average, frost greens may be used 8 or 9 times each year, with snow being a rare occurrence. 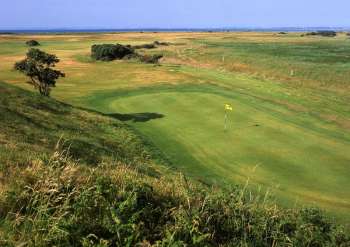