The 36-hole Sentosa Golf Club occupies much of the eastern side of the small island of Sentosa, a few hundred metres from the southern coast of the main island of Singapore. The club is owned and managed by the same organization that developed the Resorts World Sentosa, a popular tourism and attraction complex complete with 14 hotels and the Universal Studios theme park. The golf club was established in the 1970s, and today has both the best golf and the most sought-after private club membership in Singapore.

Although the Serapong and Tanjong courses share some design similarities, they are set on opposite sides of the island and differ greatly in terms of outlooks and landforms. The Serapong has long been the higher ranked, owing to its tournament pedigree, northern aspect and direct coastal interaction. Several holes play toward and along the South China Sea, with others carved around three large primary lakes.

By contrast, the New Tanjong Course is wedged into the south-western corner of the island but separated from the water by an upmarket housing precinct built recently on reclaimed land. The front nine rises twice to the top of a small hill and enjoys attractive views across the property and out to sea, but otherwise most of the holes occupy the club’s somewhat flat interior.

Originally designed by Frank Pennink in 1972, the Tanjong was redesigned by Max Wexler and Chris Pitman in the 1990s and again by General Manager Andrew Johnston in 2015. Johnston had overseen work on the Serapong Course a few years earlier when working for Gene Bates, and was invited by the club to stay on first as an employee and later as the designer in charge of a major overhaul. Johnston’s brief was initially focused more on improving course conditioning, but expanded when the club recognized the opportunity to fix routing issues and build more memorability into the layout. His work transformed the Tanjong into The New Tanjong complete with abundant, Sandbelt-inspired bunkering, sloping greens and impressive views of the Singapore Straits.

With there is no question the Johnston redesign improved the Tanjong experience, and certainly the holes around the perimeter that played too close to surrounding housing, there are some concerns with the authenticity of the bunkering style and the fact that sand or water hazards pinch landing zones to prevent long bombs a little too frequently than is ideal.

The short holes off the elevated halfway house hill are terrific, and the closing holes on each nine are both strong and difficult. The greens and bunkers are generally well constructed, and work best when partnered with clever, sculpted chipping hollows. Otherwise, with the exception of superior playing surfaces and some great views, the New Tanjong is more solid than startling golf. It’s clearly closer in quality now to the Serapong, and likely popular with the members because of the bold bunkering and more generous playing space. The fact it stands out as exceptional for Singapore, however, says more about that island’s lack of great golf than any ringing endorsement of Sentosa GC itself. 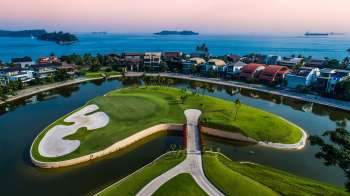 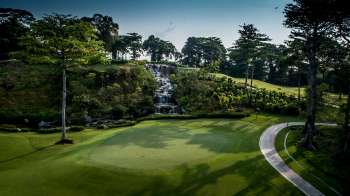 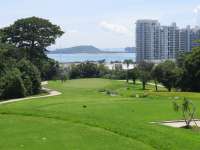 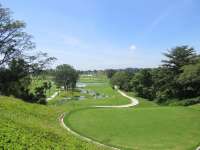 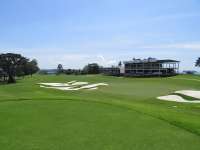 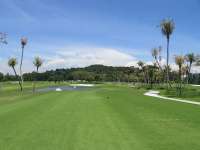