Opening in 2021, the latest golf development in Singapore is a 27-hole Graham Marsh redesign of the Singapore Island Country Club course previously known as The New.

Built within an undulating rainforest and alongside a huge dam, the New Course was originally designed by Frank Pennink and later remodelled by Michael Wolveridge and Peter Thomson. Their 18 holes ran mostly up and down a hilly site, with narrow fairways bordered by thick copse of forest and a few holes set down near the attractive dam.

The Marsh design has completely reshaped the property, with 27 holes wedged onto the New Course layout and more made of the views over the Lower Peirce Reservoir. The three nines are known as the Millennium, Peirce and Reservoir. The redevelopment was forced upon the SICC by the Singapore Government’s acquisition of the club’s Sime course for public repurposing. For now the Bukit and Island courses remain unchanged.

Beyond the reshaping of the individual holes, a significant investment has also been made in conditioning with sub-soil drainage added and the sub-air system installed in both fairways and greens to manage the frequent torrential downpours in Singapore. Greens have been grassed with Primo Zoysia while the rest of the course is covered in Zeon Zoysia.

According to the golf club website, there were several heritage trees retained during the project and relocated to frame holes and provide wildlife corridor access, including some that are apparently the oldest specimens in Singapore.

When the course opened, designer Graham Marsh had the following to say of the new layout, “Satisfaction and experience of individual holes are equally important for a golfer. While the Millennium and Peirce nines are a mix of well-balanced holes with similar terrain, creek crossings, lakes, reservoir views and strategic challenge, the Forest nine exists in its private environment with a number of ‘risk and reward’ holes which establishes its notoriety for golfers for all proficiencies.” 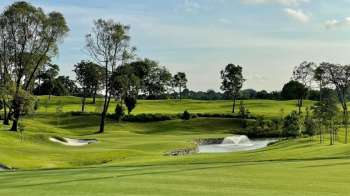