The following taken from the club's web site.

Golf in South Africa was started by one Lt General Henry Torrens who was sent here in 1885 to head up the British forces in the Cape colony. Only 9 days after his arrival, he set up a meeting at which the formation of the Cape Golf Club (later Royal Cape) was put in motion.

The first course was built in Wynberg where play began in 1886. After relocating to the Rondebosch Common in 1891, the Club opened a new course in 1906 on a property in Ottery. Until it was closed in 1910, the course on the Common was kept going, despite a number of hazards you would not normally expect to find at a leading golf club. For example, rugby matches were played across the first hole on Saturdays, the second was right next to a Malay cemetery and the fourth also served as a Municipal rubbish dump. Being a Common, the members of the public were also allowed to ride their horses there and even graze their cows.

It was from this background that the Mowbray Golf Club was formed in 1910 by the group of players who didn't relish the long trek to Ottery and it's because of this heritage that the only rugby you will find at Mowbray is on Saturday afternoons on the big TV screen in the bar.

The original course was designed by a member but over the years many changes have been made according to the designs of leading golf architects of the day. The last major modernization programme was carried out in 1993 and since then, continuous improvements have been the overriding philosophy.

The present course unfortunately is very disappointing, the layout split by a railroad and featuring a number of dull holes and some really tacky water features designed to spruce up the original creation. This is an historic club, but a pretty unappealing place to play.

Traditional members’ club which has hosted seven SA Opens, six SA Amateurs and several other big pro tournaments. Framed by the mountains of the Cape Peninsula, this tree-lined parkland course is split in two by a railway line. It remains a good challenge despite being too short to host another SA Open (the last one was in 1987). Unique in Cape Town for having firm paspalum greens, which are now in great condition after a troubled grow-in. 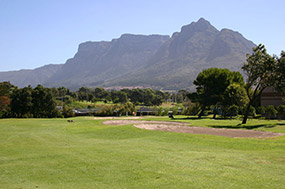